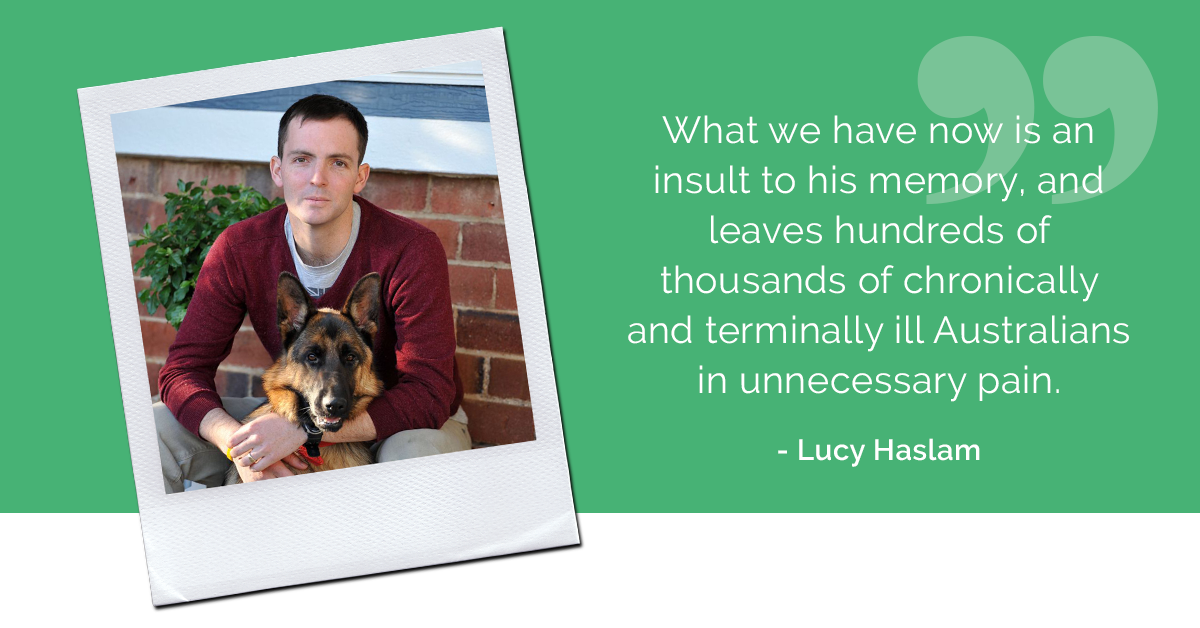 AUSTRALIA’S medicines regulator, the Therapeutic Goods Administration (TGA), is set to hand down its “interim decision” on whether it will make cannabidiol (CBD) more easily and affordably available for Australians. CBD is a non-psychoactive component of medicinal cannabis that can be easily, legally and affordably accessed in many other countries.

The TGA is likely to put forward a proposal that will make little (if any) difference to current access and cost restrictions, despite over 95% of public submissions supporting alternative options that would improve accessibility to CBD products.

However, this is only one aspect of the much broader medicinal cannabis debate. While many people believe that medicinal cannabis products are now legally available in Australia after the passage of ‘Dan’s Law’ in 2016, this is in fact far from the case.

New legislation, known as ‘Dan’s Law’, was introduced by Federal Parliament in 2016 intended to make medicinal cannabis products (including CBD) more easily available for all sick Australians who need it.

Dan’s law was championed by Lucy Haslam and her 25 year old son Dan prior to his death, after witnessing the dramatic relief Dan felt when taking medicinal cannabis for his stage 4 bowel cancer.

The new legislation received support from all sides of politics and offered hope that finally politicians had listened to the needs of the community by introducing laws that would make a real difference for access to medicinal cannabis.

Have the new laws made a real difference to patients?

Lucy Haslam says that while she used to feel proud of Dan’s Law, she feels that Australian legislators have produced a “mess” of a system that is set up to fail patients like Dan [1]. As a result, she feels “angry and bitterly disappointed”.

“While I used to be proud of that achievement, I now feel completely repulsed by it because of the way it has turned out for patients.”

Rather than making things easier, the legislative changes of 2016 that were supposed to make cannabis and cannabis products available to sick Australians have barely improved matters at all.

As a result of how Dan’s Law has been implemented, medicinal cannabis and other cannabis products are in a state of permanent ‘regulatory limbo’.

Lengthy processes and delays in gaining access to medical cannabis products has meant that large numbers of patients who actually want and need them have been able to obtain legal access.

The problem is that these products are of unknown quality and safety, illegal and are being used without medical supervision, exposing thousands of people to unnecessary risk.

“What are politicians so scared of that makes them disregard those who need it now?”

TGA regulation – is it working for most patients?

According to Lucy Haslam, “politicking” has created a needlessly obstructive system that is too hard for many patients and doctors to navigate. Medicinal cannabis products remain unapproved by the Therapeutic Goods Administration (TGA) and they can only be acquired through the TGA Special Access Scheme (SAS).

“What we have now is an insult to [Dan’s] memory, and leaves hundreds of thousands of chronically and terminally ill Australians in unnecessary pain.”

Since the TGA classes medicinal cannabis products as ‘unapproved’, they require doctors to first consider ‘all [other] clinically appropriate treatment options’ before even being able to apply for access. The TGA then assesses applications on a case-by-case basis.

Red tape & access barriers mean most people get it themselves

Due to such regulatory bottlenecks products are high-cost, which means they are simply not affordable for many patients already financially burdened by their illness. A small 25ml bottle of CBD, for example, can cost hundreds of dollars.

This is why many regard the TGA as being ill-prepared to assess medicinal cannabis. In Lucy’s view, there needs to be an independent regulator for medicinal cannabis and for the products to be extricated from the TGA’s watch, which is “the best model and it is what most countries do” [1].

“More and more people are being criminalised for being sick … it is really poor public health policy.”

She points out, “The government is talking big on being able to export to the world, saying Australia wants to be the biggest exporter of medical cannabis in the world and gloating about that, yet our own patients can’t access it.”

On Dan’s deathbed, Lucy promised to make access to cannabis better for Australians. Her efforts earned her the honour of being nominated as Australian of the Year 2016 (Finalist).

A Change.org petition [3] intended to lobby Federal politicians to fix the problems with Dan’s Law so that it achieves its originally intended purpose to help terminally and chronically ill Australians, has been signed by over 418,000 Australians.

In 2019/20 the Australian Senate ran an Inquiry into Current barriers to patient access to medicinal cannabis in Australia that received submissions from consumers and health groups. Due to an overwhelming public plea for legal access, the Senate asked the TGA to consult the public on making non-psychoactive medicinal cannabis products like CBD more easily accessible and affordable [4].

Instead of asking the public what it wanted, the TGA put forward its own (predetermined) option for comment and did so in a way that was hard for most people to understand [5]. TGA’s proposal is unlikely to change current access and cost barriers for Australians.

The TGA proposal received overwhelming (95%) public opposition, in favour of alternative options that would make CBD products easier to access and more affordable, as in many other countries [6].

Despite this, the TGA is set to ignore public opinion and adopt its own proposal.

What you can do:

Now is the time to have your voice heard. There is a window of opportunity to let Federal MPs and your State Senators know how you feel before the TGA hands down its interim decision on September 9th.

We’ve made it easy but time is short.

Act now to advocate for change that can make a real difference.

[3] Decriminalise the use of medicinal cannabis for people with terminal cancer like my son. Change.org pertition. https://www.change.org/p/decriminalise-the-use-of-medicinal-cannabis-for-people-with-terminal-cancer-like-my-son