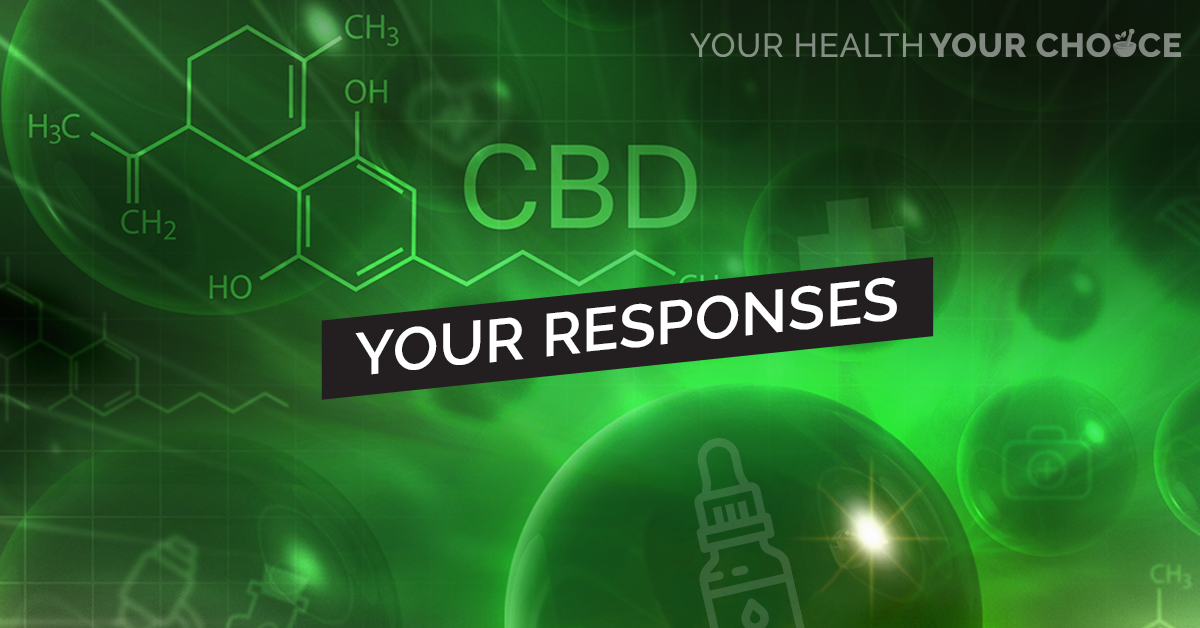 Between April and May 2020 the medicines regulator, the Therapeutic Goods Administration (TGA) conducted a public consultation on the future availability of cannabidiol (CBD) in low doses in response to a Senate inquiry recommendation and invited submissions from the public.

CBD is a non-psychoactive (non-mind-altering) component of cannabis that is used by many people to help with pain, anxiety, stress, sleep as well as for general health benefits. CBD is available to consumers in comparable overseas jurisdictions, including many European countries, some US states and the UK. A recent TGA safety review has established that CBD is safe at the low dose proposed in the consultation.

Due to the complex nature of the TGA consultation process, Your Health Your Choice (YHYC) provided a more user-friendly platform for people to provide their submissions. Via this platform the TGA received a record 5,399 submissions from the public, healthcare professionals, researchers and others, expressing considered views and sharing heartfelt stories of life-changing benefits that medicinal CBD has had for people and their loved ones.

The TGA received overwhelming (95.7%) public support for access to high quality, low dose CBD by removing it from the Poisons Standard and regulating it as a complementary medicine ingredient for use in over-the-counter products.

In a nutshell, the public wants CBD to be easy to access and inexpensive, instead of continuing to be hard to access and expensive. The latter will continue to be the case if the TGA sets aside public feedback and implements its own preferred option.

Further details are provided below:

TGA public consultation on the availability of CBD – options:

The TGA put forward its own preferred option to ‘down-schedule’ CBD, which would make it available only after consultation with a pharmacist. A proposal by a private individual to ease access restrictions altogether was also put forward.

A third ‘hybrid’ proposal was put forward by Complementary Medicines Australia (CMA), which was not referred to on the TGA consultation webpage as it was released after the consultation opened.

The TGA, via the YHYC website, received a record 5,399 submissions in just 5 days. This is the largest response to public consultation the TGA Advisory Committee on Medicines Scheduling has ever received, by a significant margin.

The highest number of submissions came from New South Wales & Queensland (27% each), followed by Victoria (20%), Western Australia (15%) and South Australia (8%), with 1% each from Tasmania, Northern Territory and the ACT.

Around 80% of people consented to publication of their submission on the TGA’s website.

Reasons people identified why they would like to use CBD:

Respondents to the TGA consultation via the YHYC website identified the following reasons why they wanted to use CBD: 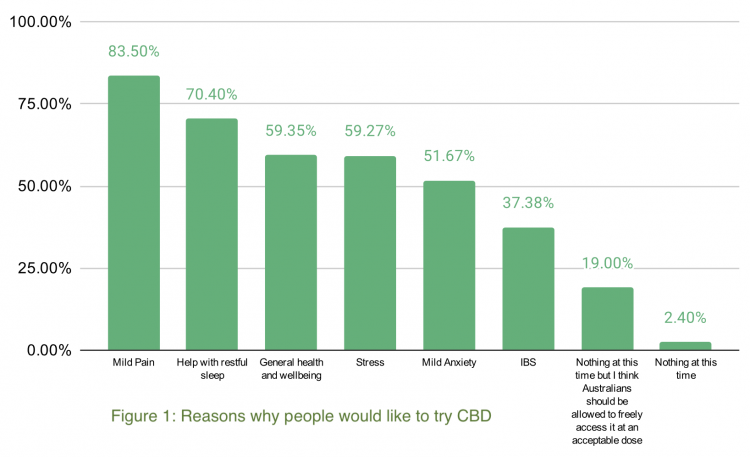 Do you think CBD has to be ‘proven’ to work before you can access it?

The public was asked on their views whether CBD had to be ‘proven’ to work at a very low dose (60mg) for the health claim on the label, before it is allowed to be sold. 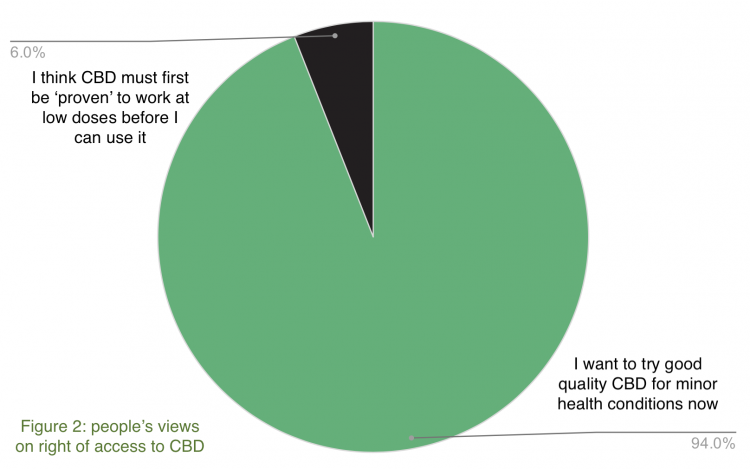 There is substantial anecdotal evidence that CBD can assist with a wide range of health conditions, with many people currently acquring CBD ‘off-grid’ to access its benefits. As mentioned, a recent TGA safety review has also established that CBD is safe in the proposed low dose.

What proposal for greater access to CBD products received the most public support?

Figure 3 shows that 95.7% of respondents supported proposals recommending that CBD be de-scheduled (removed from the Poisons Standard) and made available for use in over-the-counter complementary medicines.

Only 4.3% supported the proposal put forward by the TGA to down-schedule CBD to Schedule 3 in the Poisons Standard, to restrict its access to pharmacist-only. 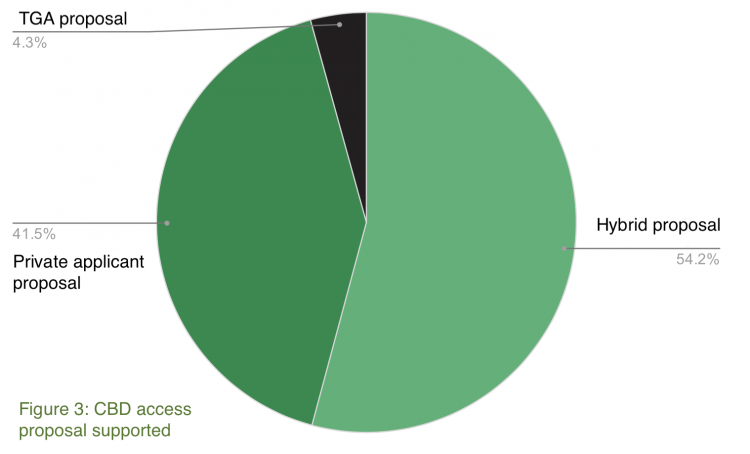 The result of the public consultation is clear: the public overwhelmingly supports access to high quality, low dose CBD via its removal from the Poisons Standard (‘de-scheduling’) and regulation as a complementary medicine ingredient for over-the-counter sale.

This is consistent with the TGA’s own recent safety review of CBD, which according to the TGA:

“established that low doses of CBD may have possible clinical utility when used via the oral route in the management of some conditions that do not require medical practitioner oversight” and “establishes that CBD has an acceptable safety and tolerability profile at the proposed dose.”

TGA preferred option would not result in any real-world change to current restrictions:

The TGA consultation webpage did not explain the following important details relating to the TGA’s preferred option to down-schedule CBD from Schedule 4 (medical practitioner-only) to Schedule 3 (pharmacist-only):

– the TGA option would still require a CBD product to be assessed by the TGA via the ‘Registered’ (AUST-R) medicine pathway, meaning it would have to pass the same high-level evidence threshold applied to higher-risk prescription drugs. This assessment pathway is costly and would result in higher-cost products, if any were ever approved.

– to date, the TGA has not approved any AUST-R CBD products for domestic use under Schedule 4.

– ‘Listed’ (AUS-L) complementary medicine products are able to make low-level therapeutic claims commensurate with: 1) their low-risk status and 2) making only low-level therapeutic claims. As a result, they do not need to have the same high level of evidence as AUST-R medicines. The TGA has already established that CBD is safe at the proposed low dose and low-level evidence exists for the benefits of CBD in mild conditions (as currently applies to all approved Listed medicine ingredients).

In effect, the TGA’s preferred option of down-scheduling CBD from Schedule 4 to Schedule 3 would not result in any tangible change to existing access restrictions in the foreseeable future.

The Senate committee noted, “significant support from submitters and witnesses for cannabidiol-based products to be made available over-the-counter, either through down-scheduling in the Poisons Standard or by being regulated as complementary medicines.” There is a question whether the TGA option is consistent with the Senate committee’s statement that:

“Allowing medicinal cannabis products containing low-dose cannabidiol with very low levels of psychoactive cannabinoids to be accessed over-the-counter would greatly increase the accessibility of these products for patients. It would also bring Australia in closer in line with models of access in countries such as the United Kingdom and Canada.”

The Australian Senate Inquiry noted that many patients struggle to access products such as CBD and expects, as does the public, that the TGA Interim Decision will take the public’s views seriously and put in place measures to ensure high quality, low dose CBD products are readily available to consumers, in line with other a number of overseas jurisdictions.

Or will the TGA seek to dismiss the weight of public feedback and back its preferred stance?

In November 2019, the Senate referred an inquiry into current barriers to patient access to medicinal cannabis in Australia to the Senate Community Affairs References Committee for inquiry and report by 26 March 2020, to better understand and address access barriers for patients.

This included whether to make CBD more readily available to consumers. CBD is readily available in comparable overseas jurisdictions, including many European countries, some US states and the UK (to understand the differences between ‘cannabis’, ‘marijuana’, ‘hemp’, ‘CBD’ and ‘THC’, click here).

The Senate Inquiry reported on 12 February 2020 recommending that the TGA consult with the public on reducing access barriers to CBD.

In particular, Senate Recommendations 12 and 13 provided that the TGA conduct broad public consultation on de-scheduling or down-scheduling CBD as a matter of priority, then refer the issue to the TGA Advisory Committee on Medicines Scheduling.

‘Down-scheduling’ refers to either making CBD available over the counter in pharmacies (‘Schedule 2’) or behind the counter after consultation with a pharmacist (‘Schedule 3’). Currently, CBD is prescription-only (‘Schedule 4’) with applications having to be made to the TGA for access. ‘De-scheduling’ refers to removing CBD from the Poisons Standard altogether and making it widely available as an ingredient for use in over-the-counter complementary medicines.

For CBD to become widely available for sale to the public, the Government – via the TGA – must be comfortable that CBD products are safe and that risk to public health and safety is acceptable. Like other medicines, dosage, labeling and therapeutic claims must help people use it safely and prevent accidental harm or misuse.