A level paying field? How the evidence for conventional medicine stacks up 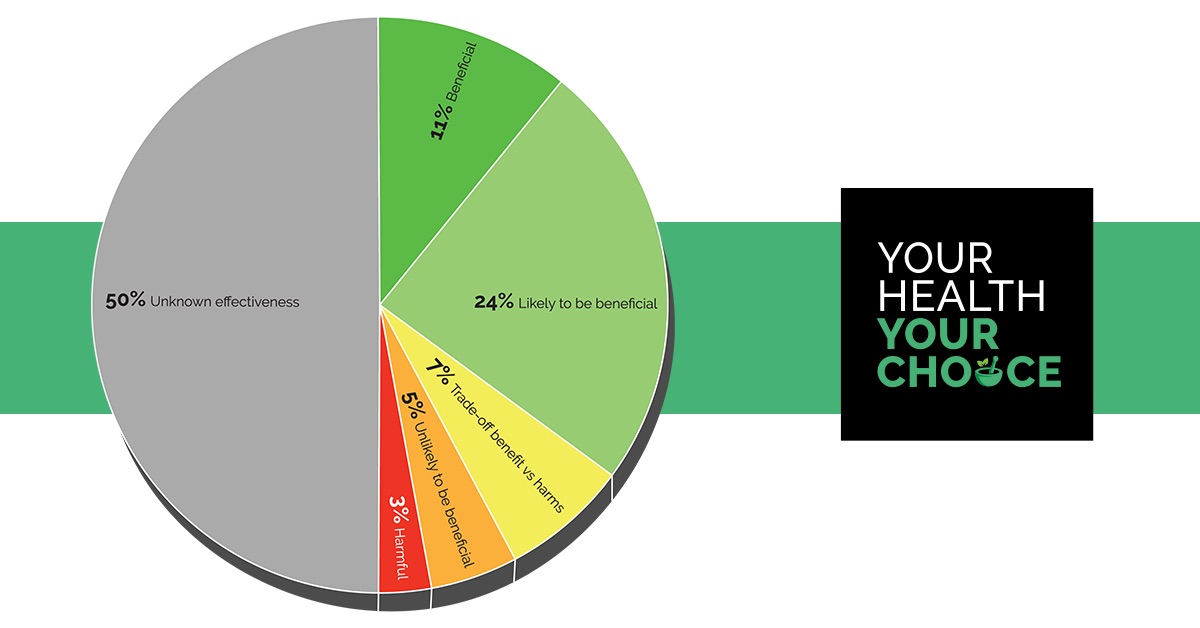 A common misconception is that conventional medicine is ‘evidence-based’ whereas complementary and alternative medicine (CAM) ‘isn’t’. This is commonly argued by medico-skeptics who lobby government and the public through the media.

But is this actually true?

Below we look at the state of the evidence underpinning common medical treatments funded by the public health system and how it compares to complementary medicine research.

What is the evidence regarding common conventional treatments?

Like most things in life, the answer is not clear-cut.

This also applies to medical treatments funded by public healthcare and rebated by private insurers in Australia.

The BMJ review shows that 50% of treatments are of ‘unknown effectiveness’, while 7% are a ‘tradeoff between benefits and harms’. Such figures would surprise many. 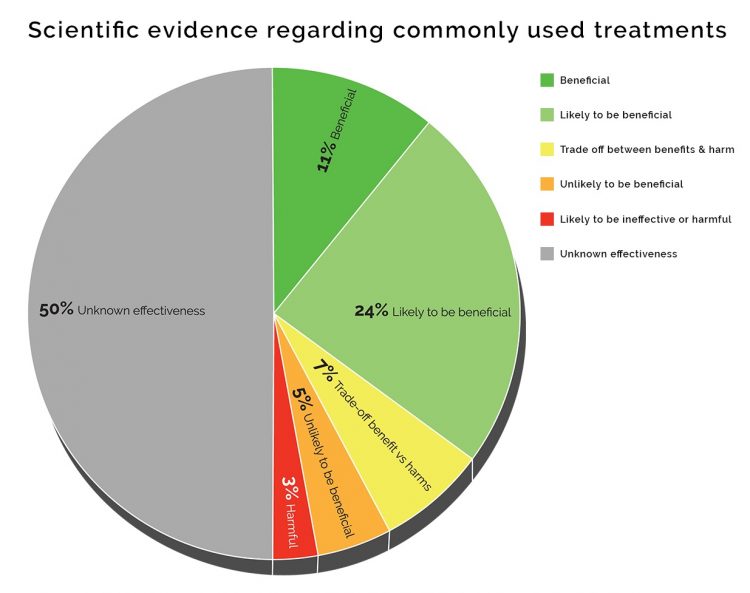 The BMJ review emphasises that its categorisation of the effectiveness of treatments does not identify how often they are used in healthcare settings or their effectiveness in individual patients. It highlights how evidence based treatments are for certain indications, based on randomised controlled trials (regarded as the ‘gold standard’ in clinical research).

For example, the evidence on the group of anti-depressants known as selective serotonin reuptake inhibitors (SSRIs) for major depressive disorder is unclear, with the potential for small beneficial effects seeming to be outweighed by harmful effects [2]. Likewise, the evidence for the SSRI Fluoxetine (Prozac) for depression in adults is unclear, with reviews highlighting that most studies on SSRIs are small, funded by drug companies and fail to report methodological details (i.e. high risk of bias) [2, 3]. However, this does not mean SSRIs are not clinically beneficial in individual circumstances.

When the balance of evidence is looked at objectively, the proportion of trials that are positive, negative or inconclusive between ‘conventional’ and ‘complementary’ medicine research is strikingly similar.

For example, of the 176 randomised controlled trials included in the National Health & Medical Research Council (NHMRC) Homeopathy Review published in 2015, 50% were positive, 5% negative and the rest inconclusive – a proportion consistent with conventional medicine research findings. NHMRC did not report these figures, with evidence of how this predominantly positive dataset was annulled being forwarded to the Commonwealth Ombudsman for investigation.

A recent review of the evidence on whole-system, multi-modality Naturopathic medicine shows that it can be effective in treating conditions including cardiovascular disease, musculoskeletal pain, type 2 diabetes, polycystic ovary syndrome, depression, anxiety, and a range of complex chronic conditions.

In Australia, high quality complementary medicine research is being conducted and supported by research institutes and Universities.

For example the National Institute for Complementary Medicine Research (NICM) at the University of Western Sydney is the largest complementary medicine research institute in the Southern Hemisphere.

NICM research has recently been recognised as ‘well above world standard’ according to the Australian Research Council’s (ARC) latest Excellence in Research for Australia (ERA) report, the State of Australian University Research 2018–19: ERA National Report. The result confirms NICM as a world-leading research institution for the third consecutive triennium of rating, achieving the highest possible rating of ERA 5.

Southern Cross University, which offered graduate and post-graduate degree programs for naturopaths for many years, will host the new National Centre for Naturopathic Medicine to support education, research and the advancement of evidence-based natural medicine.

So next time you hear someone say, ‘conventional medicine is backed by evidence and complementary medicine isn’t’, you know it’s just opinion and not evidence-based.