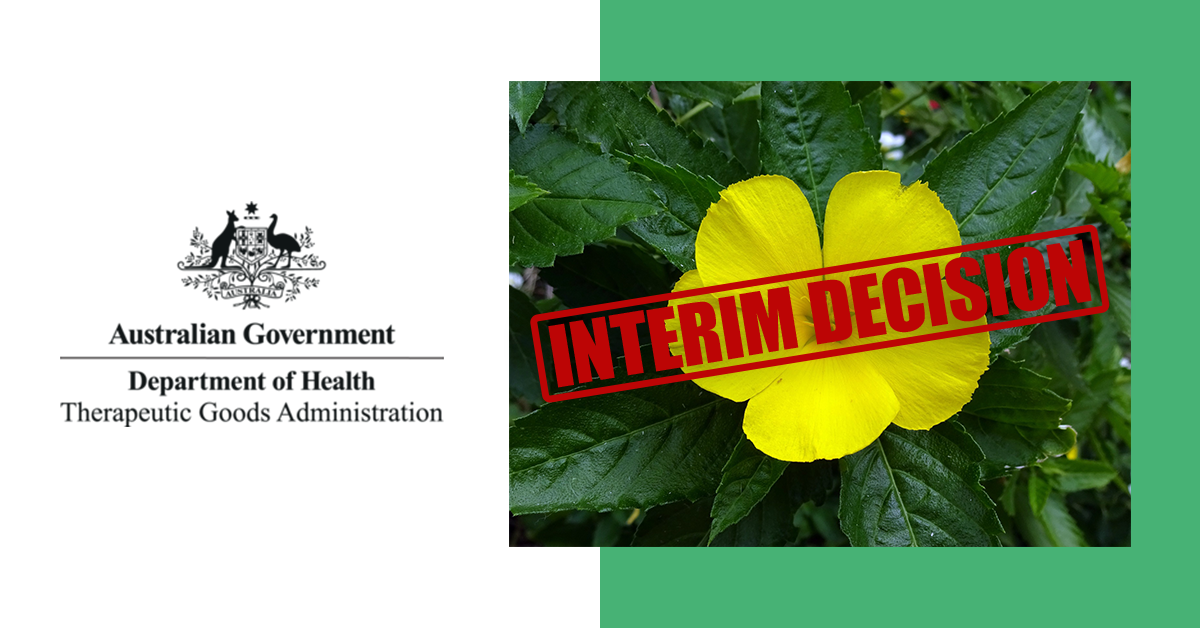 In 2018, the TGA acted on a decision to schedule the naturally occurring compound ‘arbutin’ as a poison and to limit the availability of herbal preparations containing arbutin to levels less than 0.0025%, a very low and difficult level to reliably measure. This has resulted in the reduction or removal of supply of affected herbal preparations.

A number of popular herbs that herbalists routinely prescribe have been caught up in the TGA decision, including Bearberry (also known as Uva Ursi, Arcostaphylos uva-ursi), Damiana (Turnera diffusa) and Yarrow (Achillea millefolium), alongside another eight arbutin-containing herbs. Many of these herbs are also used in over-the-counter products.

The TGA’s concern focusses on the chemical ‘hydroquinone’, which is used as a photographic developer, antioxidant, stabilizer (in paints, fuels, oils and polymers), as a chemical intermediate, in pharmaceutical drugs and as a skin depigmenting agent and in hair preparations.

By contrast, ‘arbutin’ (a ‘hydroquinone glycoside’) is a larger compound naturally occurring in many herbs and foods, which contains hydroquinone as a component. It appears the TGA acted on the grounds of theoretical risk, because some literature sources suggest that it is a possibility that arbutin might hydrolyse into free hydroquinone. In other words, the TGA assumed the two substances were equivalent, when in fact they are not.

Arbutin is stable in the human digestive tract and once ingested is completely metabolised by the liver – why it is not detected in urine. This most likely explains why general toxicological assessment of arbutin indicates it is safe and why arbutin-containing herbs have a long history of safe use around the world, without any appreciable real-world evidence of harm. Such factors were not considered by the TGA’s in its 2018 action.

Thanks to active representation by the complementary medicines sector, the TGA have now announced an “interim decision” to increase arbutin limits to 500mg in oral preparations for general access. This has come about as TGA has acknowledged that ‘arbutin’ and ‘hydroquinone’ are separate substances of differing toxicity and molecular make up and as a result need to be considered separately and distinctly.

If this decision is made final, eleven arbutin-containing herbs will once again become available in medicinal preparations, after the recommended implementation date of 1 June 2020. Herbs containing higher limits will be accessible via “prescription only”.

In summary, the TGA delegate provided the following reasons for making the interim decision to allow 500mg of arbutin in oral herbal preparations:

– I am of the view that arbutin and hydroquinone are separate substances of differing toxicity and molecular make up and as a result, should each have separate entries in the Poisons Standard. I agree with the data presented in the application that arbutin has a significant history of traditional use and is present in many food sources, as well as being a component of eleven herbal ingredients included in the TGA Permitted Ingredients Determination

– I have taken into consideration the toxicological data presented and I find that the proposed cut-off of 500 mg or less of arbutin per recommended daily dose as proposed by the Applicant to be acceptable. The amount of free hydroquinone following absorption of a 500 mg dose of arbutin would result in acceptable amounts of free hydroquinone in accordance with the cut-offs for hydroquinone in the Poisons Standard. I acknowledge that this cut off is well within the safe levels outlined by the European Scientific Cooperative on Phytotherapy (ESCOP), the European Medicines Agency (EMA) monograph and the British Pharmacopoeia (PB) monograph.

– I find the Schedule 4 entry for arbutin appropriate, noting that any dosage of arbutin above the cut-off requires medical management by a general practitioner.

Practitioners and any other interested parties are encouraged to make a submission to the TGA showing their support.

COVERSHEET: Please fill in this cover sheet and attach with your submission https://www.tga.gov.au/form/scheduling-consultation-coversheets

SUBMISSION CONTENT: Your submission can be as simple as stating that you support the TGA’s interim decision to permit 500mg or less of arbutin in oral herbal preparations to be available for access. Although not necessary, you may wish to provide additional information in support of this decision.

How to make a submission: https://www.tga.gov.au/scheduling-decision-interim/interim-decisions-and-invitation-further-comment-substances-referred-june-2019-acmsaccs-meetings