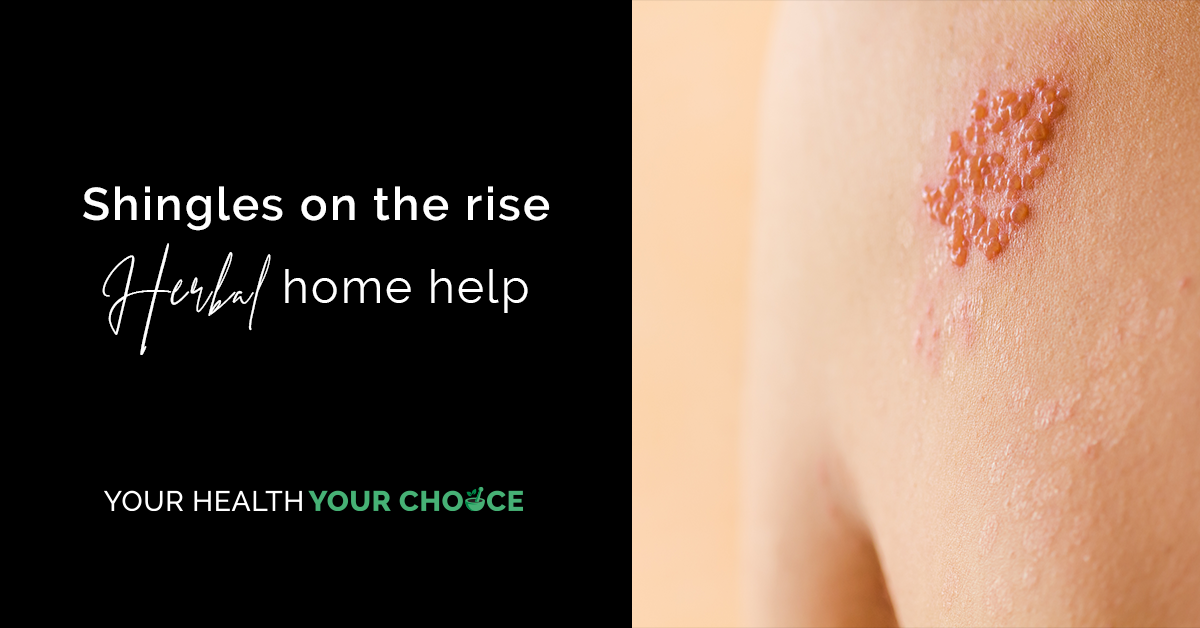 Shingles (herpes zoster or HZ) is a viral infection caused by the reactivation of the varicella-zoster virus (VZV), which is also responsible for chickenpox (varicella) that usually occurs during childhood.

Shingles predominantly affects adults, causing a painful rash or blisters on the skin, usually on one side of the body or side of the face, spreading down sensory nerve fibres that lead from the spinal cord to the skin.

Without treatment, the typical healing time of herpes zoster symptoms is around 30 days. However, symptoms may last for weeks or months. More severe symptoms often associated with herpes zoster include postherpetic neuralgia, which leads to persistent stabbing and burning pain for three or more months after the lesions have healed [1].

Other herpes viruses that cause infections and illness in humans include herpes simplex 1 & 2 (oral and/or genital herpes), Epstein-Barr virus (causing glandular fever), cytomegalovirus and roseolovirus (causing roseola rash in infants).

People most impacted by shingles:

Shingles most often reactivates in people over the age of forty, due to immune deterioration that occurs over time as we age. It appears that the shingles virus is more likely to affect people who are immuno-compromised, or people who have been subjected to prolonged periods of stress. In today’s world, there are multiple environmental factors that place high stress on our immune systems.

Clinically, patients are very often observed to have a shingles outbreak after a period of sustained stress (physical or psychological) has ‘peaked’ or resolved.

A number of studies have linked shingles with chronic, daily stress (in particular psychological), which weakens the immune system and increases the likelihood of the shingles virus reactivating.

Shingles on the rise:

Shingles appears to impact approximately 1 in 3 people, with older adults and people who are immune-compromised being most at risk. However, many studies are showing that the prevalence of shingles is increasing yearly in all age groups, including in younger adults.

A recent systematic review provides an overview of the worldwide incidence of shingles in the general population looking at data from 69 studies, particularly in people over 50 years of age [2]. It found:

“Over the last few decades, the incidence of HZ has increased alongside a growing ageing population, and this trend is independent of geographic location. … HZ is associated with a substantial disease burden and is expected to increase due to population aging.”

When comparing the geographical regions, the highest incidences were mostly reported in Asia-Paciﬁc countries.

Although the incidence of shingles is increasing due to an ageing population, this on its own does account for its increased prevalence across all age groups, including younger people. This indicates that other factors are at play impacting immune susceptibility to reactivation of the varicella-zoster virus.

Once shingles has set in, the main and most debilitating symptom is the pain caused by the rash, which can be intense!

There is no cure for shingles, but antiviral medicine prescribed by a medical practitioner may relieve the symptoms, providing it is started within three days of the shingles rash appearing. Conventionally, over-the counter medicines, such as paracetamol and non-steroidal anti-inflammatories are suggested to assist with the pain.

However, there are a number of specific botanical medicines that can be used as home remedies for managing the pain associated with shingles rash and to aid recovery. The main ones are:

St John’s Wort (Hypericum perforatum) is a medicinal weed that has spread throughout most parts of Australia.

St John’s Wort as an infused oil, applied topically, may assist the pain of shingles. This herb not only has an anti-viral action, but it also has a particular affinity for the herpes zoster virus and for nerve pain. The oil penetrates into the skin and helps to relieve the pain.

You can purchase St John’s Wort infused oil over the counter, or make your own by infusing hypericum flowers into extra virgin, cold-pressed olive oil (making sure the container is tightly packed with plant material to ensure adequate strength).

The oil can be gently massaged into the area four to five times a day (or as needed).

Most people are familiar with Peppermint (Mentha x piperita) taken as a tea to relieve nausea, gas, abdominal bloating and intestinal colic, but few would know that this herb can also be particularly useful in helping to relieve the pain of shingles.

Peppermint has a cooling effect and can soothe the intensity of the neurological pain.

It is best applied topically in a cream base, which can be purchased either over the counter in health food stores or from natural medicine practitioners.

Lemon Balm (Melissa officinalis) is another member of the mint family (like Peppermint) that can be useful as a specific in soothing the pain associated with shingles. Both herbs are easy to grow garden plants.

It is best applied topically in a cream base, and can be combined with Peppermint and/or St John’s Wort oil if desired.

Neem (Azidirachta indica) leaves have antiviral properties that can counteract the effects of the shingles virus.

The Neem tree is native to the Indian subcontinent and used extensively in Ayurvedic medicine, including as a widely-used topical treatment for shingles.

It is best used as an infused oil, applied topically.

In China, herpes zoster is commonly treated topically with Hibiscus (Hibiscus sabdariffa). Hibiscus has been proved to be a very safe herb, both topically and orally.

There are many other other herbs and homeopathic medicines that may be useful in helping people suffering with shingles. These are best prescribed by trained natural medicine practitioners, taking into account a person’s individual symptoms.