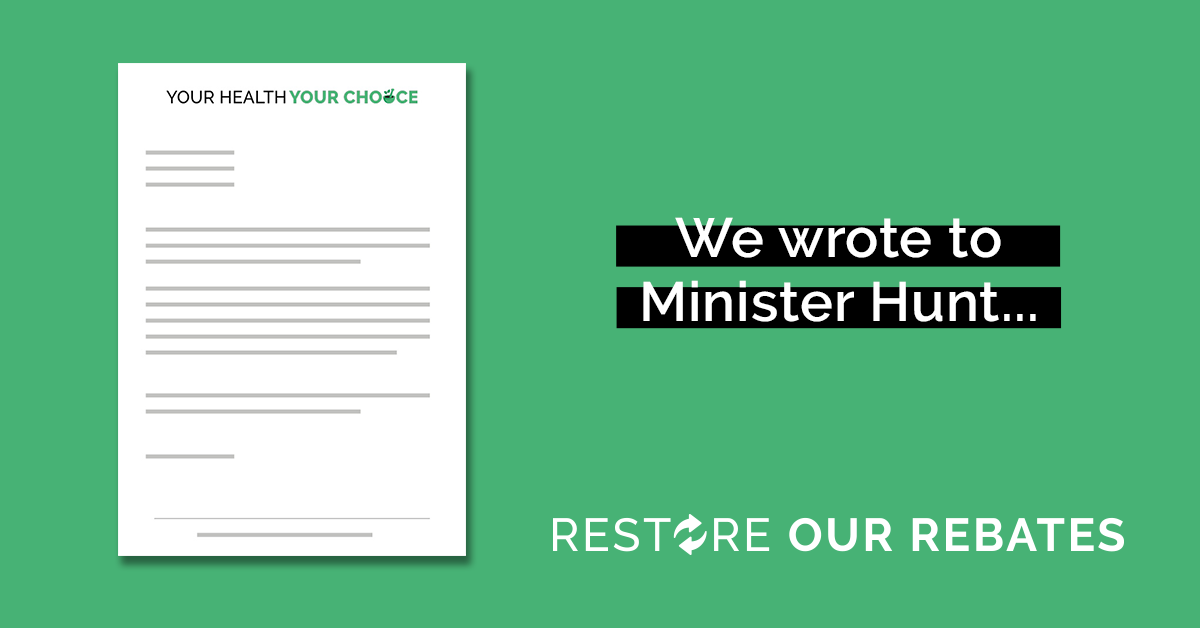 Below is a letter sent in mid-November 2021 to the Minister for Health, the Hon Greg Hunt, from Your Health Your Choice requesting that private health funds again be allowed to offer rebates for natural therapies.

The Department of Health replied on the Minister’s behalf in mid-December 2021, declining the request.

We are writing to you regarding the 2019-20 Natural Therapies Review to inform government on Private Health Insurance (PHI) rebate eligibility for natural therapies. When you announced the Review in April 2019, it was applauded by the natural medicines sector who represent the three in four Australians that integrate natural therapies into their daily healthcare. It was also fully supported by the Your Health Your Choice (YHYC) platform, which ceased campaigning activities in full support of the program.

However, Covid notwithstanding, the Review is now into its third year and work has fallen significantly behind its anticipated schedule. Not only will the Review not be completed within this election cycle (as initially intended), it is becoming increasingly clear that it is unlikely to be completed even during the next. Despite best intentions, the Review has already failed to fulfil its promise to the community of delivering an outcome within a reasonable timeframe.

Contributing to this is the reappearance of administrative and methodological deficiencies and conflicts that beleaguered the 2014-15 review, which is rapidly diminishing community confidence in the Review’s integrity. A summary of these factors is provided in the Addendum to this letter.

After consideration of community expectations, core Government objectives and impacts on industry and consumers, there is an alternative solution that can be readily implemented and that better aligns with the needs and wishes of all stakeholders, including Government, consumers/patients, professional associations and the private healthcare sector.

This is to remove the Government prohibition on PHI insurers’ ability to offer rebates for natural therapy services, which is within your power to action. This is not dependent on a deficient, prolonged Review program spanning election cycles that has already lost community and stakeholder trust.

Fortunately, a precedent has already been set for allowing PHI funds to cover natural therapies for which the previous 2014-15 review found there was ‘no conclusive evidence’. In 2019 you allowed massage, which accounts for the significant majority (~65%) of the natural therapy PHI rebate pool, to maintain its PHI rebate eligibility, even though the 2014-15 review reported ‘no conclusive evidence’ that it had health benefits. Other natural therapies should be afforded equal justice.

Hence, the value at stake for asking the community and other stakeholders to endure another drawn-out, critically flawed Review for other natural therapies is negligible. Allowing health funds to provide rebates for natural therapies (as has already been done with massage therapy) would restore equity.

Minister, we urge you to seriously consider this more workable, practical and electorally popular solution of allowing PHIs to provide rebates for natural therapies at their own discretion.

This also aligns with the wishes of the PHI sector itself. On 19 November 2020, Private Healthcare Australia wrote to you requesting that,

“The list of therapies that private health insurance is unable to cover should be repealed and the funding of those therapies left to the discretion of the funds”, noting “There is no sound public policy argument for government intervention in this area”.

We support this position, which also aligns with the wishes of the natural medicine, education and research sectors, small businesses across Australia, commercial realities, consumer needs and Government goals. It resolves an ongoing dilemma that represents a net cost (not saving) to Government, industry and the community. We are certain that valuable Government resources could be much better spent dealing with the ongoing COVID response.

Natural therapies are highly used and valued by many in the community, who invest in health maintenance and chronic disease management: a major strength of natural therapies’ contribution to community healthcare. It is this demographic in particular that has reduced and/or abandoned PHI coverage, after core value was stripped from insurance policies via the removal of natural therapies.

While just 35% of medical treatments have sufficient evidence to be categorised as either ‘beneficial’ (11%) or ‘likely to be beneficial’ (24%), with 50% of treatments of ‘unknown benefit’ [1], they are nevertheless supported by the public purse and rebated by PHIs.

Thus, allowing PHIs to offer rebates for natural therapies would create equity and fairness across the entire health spectrum.

Millions of Australians continue to use the therapies subject to the Review and allowing health funds to cover these therapies will ensure they are more accessible to the community. This would be highly popular with the public and, by restoring core value, also boost the PHI industry by offering a broader range of incentives. The benefit to all stakeholders, including Government, is clear.

There is already an abundance of evidence published in peer-reviewed journals showing that natural therapies are both effective and cost-effective, supporting widespread public use of, and demand for, these modalities. Many of these therapies have been incorporated into international clinical guidelines (e.g. American College of Physicians, UK NICE guidelines). This evidence has already been forwarded to Government and funds should be allowed to make choices about the products they offer customers.

When this solution is presented to the average, fair-minded Australian, they would reasonably consider that it is the most equitable, cost-effective solution. It passes the ‘pub test’ – meeting the needs of all stakeholders and circumvent the need for any further public awareness campaign on this issue, particularly leading into a new election cycle.

Thank you for considering the issues raised in this letter and we anticipate your response.

Your Health Your Choice