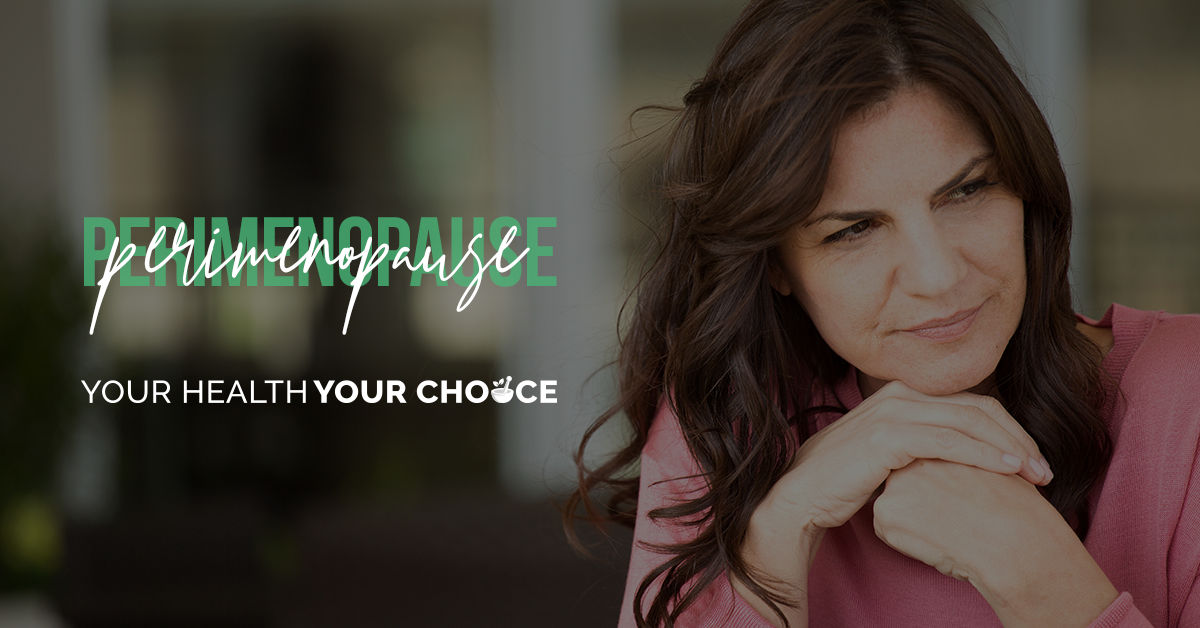 Perimenopause is a greatly overlooked period of change for women, a time of hormones beginning to wind down in the transition to menopause. It is not unusual for women to compare perimenopause to a wild rollercoaster ride, interfering with their quality of life, giving good reason for being termed ‘the second puberty’.

As women approach menopause, there are few eggs remaining in the ovaries. Fewer eggs are released and therefore less hormones are produced, reducing function until the ovaries finally stop working and periods cease.

Perimenopause varies greatly from one woman to the next and usually occurs between the ages of 42 and 55, with some experiencing symptoms for up to 10 years before their final period. Most women notice pronounced changes approximately 4 years before menopause.

The standout side effect of fluctuating or low levels of hormones is many women finding they no longer cope well with stress. Some women feel pummelled by hot flashes and wiped out by heavy periods, etc. Periods may end abruptly for some, while others may menstruate erratically for years.

The good news is that many symptoms are temporary and manageable if women have a focus on health and wellbeing.

A woman’s menstrual cycle can tell a great deal about her health, wellbeing, and what stage of fertility she is in. Hormones complexly operate in accordance with mental, emotional, and physical health. Thus, robust wellness relies on happy hormones and vice versa.

During her fertile years, if a woman’s body is functioning optimally and she has a sense of wellbeing, ovulation happens effortlessly and regularly, and periods occur regularly and without symptoms.

During perimenopause, hormones promoting ovulation begin to diminish due to the ovaries producing less oestrogen.

When oestrogen reaches a certain level, the brain signals the pituitary to turn off other hormones which in turn stimulates the ovary to release the egg from its follicle (ovulation). The leftover follicle produces progesterone, in addition to oestrogen, in preparation for pregnancy.

But ovulation goes beyond fertility and contributes to long-term investment of health right into a woman’s later years. The progesterone produced from ovulating helps prevent uterine cancer, maintain HDL cholesterol levels (also known as the “good” cholesterol) and reduces symptoms associated with menopause, like mood swings.

The closer the proximity of menopause, the more likely the appearance of hot flashes, night sweats, excessive uterine bleeding, and vaginal dryness – all due to declining oestrogen. This period can be extremely stressful and debilitating.

Other symptoms stem from the crash in progesterone from less ovulatory cycles. Progesterone is calming and the loss of this hormone can destabilize the HPA (hypothalamic/pituitary/adrenal) axis or stress response system. This recalibration of the nervous system places women at an increased risk of anxiety, depression, insomnia, etc.

Besides progesterone and oestrogen, there also three other hormones running this change-of-life show: insulin, cortisol, and oxytocin.

The key hormones that affect our wellbeing

Oestrogen is the dominant sex hormone highest in the first half of a woman’s cycle. It is produced by the developing egg follicles within the ovaries, as the body prepares for ovulation.

It boosts serotonin and dopamine, neurotransmitters that boost your mood, sleep, motivation, libido, and memory. This is the time of high energy for women.

Progesterone dominates the second half of the cycle, when the corpus luteum, which is left behind after the egg is released at ovulation, begins producing progesterone.

Insulin has an intimate relationship with reproductive hormones, there is a risk of becoming “insulin-resistant” causing problems processing sugar and refined carbohydrates. This means you have excess insulin in your body and your cells no longer respond when insulin tries to do its job of guiding glucose into cells for energy, leading to hyperglycaemia. The result is hot flashes, fatigue, difficulty concentrating, weight gain, and other perimenopausal symptoms.

Cortisol is another key player as it is the key stress hormone that is an immediate responder in times of danger and stress. Following a stressful event, your adrenal glands pour out cortisol, which boosts the amount of blood sugar available for fuel and revs up your heart rate so you can fight off or escape a threat, or otherwise deal with the stress.

Prolonged stress and the resulting high levels of cortisol robs your body of progesterone, oestrogen, and testosterone and causes blood sugar to rise. Say hello to weight gain, especially around your belly. You lose your sex drive and suffer other menacing symptoms like night sweats, mood swings, insomnia, and burn out.

Oxytocin, the wonderful love hormone. Our brains are flooded with oxytocin as we cradle our new-born. It also surges with orgasm, laughter, play, hugging, caressing your pet, and giving.

Increase oxytocin, and cortisol drops. The more oxytocin in your body, the calmer, less afraid, and more social you’ll feel. Plus it has an anti-aging effect!

How to find a happier transition, naturally

There have been many trials of various therapies to calm, energise, nourish and strengthen women’s mind, body and spirit during this time of change.

Although medical hormone therapy may be an effective treatment for some women, its use has declined following the publication of prospective trials suggesting increased risks of breast cancer.1

The following list is far from exhaustive. We have simply explored the most popular and evidence-based therapies.

Used by millions of women around the world for hormonal and menopausal symptoms, homeopathy should be an obvious solution. One multinational study observed the use of homeopathy in 438 menopausal women with 90% of the women reporting disappearance or lessening of their symptoms. These changes mostly took place within 15 days of starting individualised homeopathic treatment.2

Traditionally, maca has been used by native Peruvians as both a food and medicine for hormonal imbalances, fertility, and menopausal symptoms, including hot flashes, vaginal dryness, and loss of energy, libido, and depression.3 It is now recognised to help control blood sugar and insulin levels in the body, boosts energy for workouts, and regulates hormones.

Maca stimulates and nourishes the hypothalamus and pituitary glands which are the “master glands” of the body. These glands regulate the other glands, so when in balance they can bring balance to the adrenal, thyroid, pancreas, ovarian and testicular glands.

A study from the journal Menopause showed that maca benefits had positive results on boosting menopausal women’s moods and decreasing levels of anxiety and depression.4

One or two scoops of maca in smoothies every day are a good way to harness all the powers of this remarkable herb.

Traditionally, cinnamon bark has been used to treat menstrual pain and infertility.

In Ayurveda, cinnamon is seen to slow the movement of food through the small intestines, resulting in slowing glucose uptake and lower insulin resistance. Keeping insulin levels in check is necessary to maintain good hormone health and can even keep symptoms of hormonal disorders at bay.

Perimenopausal changes can result in an increase in symptoms of inflammation, such as body stiffness, headaches, general muscle pain and hot flushes. Curcumin is a potent anti-inflammatory that can help fight aches and pains associated with perimenopause. Curcumin helps reduce inflammation by inhibiting the activity of pro-inflammatory enzymes in the body.

Curcumin is a natural phytoestrogen that can mimic the presence of oestrogen.

Evidence shows that Curcumin can alleviate depression by reducing brain inflammation and boosting the production of neurotransmitters such as serotonin and dopamine.6 Depression is a major factor during perimenopause and curcumin may remove this burden.

A key component of yoga is pranayama, Sanskrit for ‘controlled breathing.’ This breathwork may help lessen anxiety, calm the mind, and help women achieve a balanced emotional state during yoga as well as off the mat. Here are 5 gentle postures to help throughout this transition.

One systematic review found evidence of yoga alleviating psychological symptoms in menopausal women.7 Many women have reported better overall mood and energy levels from a regular yoga practice. As stress is the precursor to hormonal imbalance, it is imperative that women find a way to hit the relax button.

A great tool for managing weight gain, insulin resistance, and other common symptoms of perimenopause. Studies have shown that intermittent fasting can aid weight loss.8

This can be a simple 13- to 15-hour fast taking place overnight. Some women like to fast longer, right up to lunch. Always listen to your body. If fasting makes you feel stressed, then it is not right for you and the stress will defeat the purpose.

The most fun way to boost levels is to have orgasms more often. Also hugs, connections with friends, being generous, seeking massages, and loads of self-love will naturally boost levels.

Supplements such as vitamin C, vitamin D, magnesium, vitamin B complex, and melatonin can also help. These work in different ways, but generally they support the oxytocin receptors on cells that let this hormone in.

“You yourself, as much as anybody in the entire universe, deserve your love and affection”  Buddha

There’s a lot going on with women’s hormones during perimenopause. But one thing is clear – relaxation, self-care, love and wellbeing play an indispensable role in balancing hormones and carrying women happily through the transition years leading to menopause and beyond.