Your stories: How I used a holistic approach to regain my health 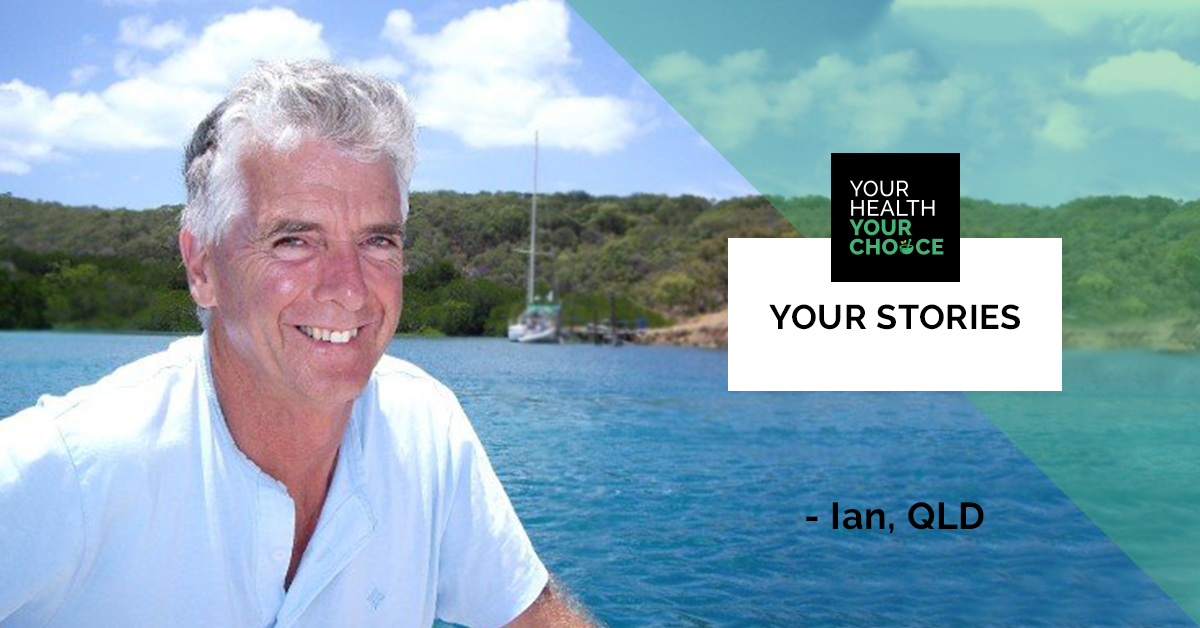 “In June 2018, based on the appearance of visibly enlarged lymph nodes on my neck and some initial pathology ordered by a GP, I was diagnosed with Non-Hodgkin lymphoma (NHL) and referred to a Haematologist for further investigation. I saw the Haematologist in August and had another biopsy that confirmed a diagnosis of Mantle Cell Lymphoma (MCL) with a Proliferation Index of 90%. I also had extremely high saturated iron levels (probably as deadly as the cancer). I declined the suggested Standard Treatment and set about treating the condition myself. I consulted a number of Natural therapists to address what I deduced may have been causes contributing to the MCL. Being an Engineer, I started with a list of possible causes and set about remediating all of them.

My Clinical Nutritionist and I also accessed the PubMed database and searched for all studies relating to MCL and started supplementation and natural treatments identified in these studies as being effective at reversing this cancer. We also investigated the implicated gene expressions related to MCL and found the studies identifying natural treatments with efficacy in regulating these gene expressions back to normal.

My next Pathology report in September 2018 reported normal blood counts and gene expressions, and no Circulating Tumour Cells (CTC’s) detectable in the tests.

I then went to Bali for 3 weeks and took part in a 200 hour yoga teacher training and in November I noticed that my visible tumours had completely disappeared. I did long days of hard physical exercise in a class with 16 fit young people, most less than half my age (I am 67).

My Haematologist witnessed my recovery but did not supply treatment or advice (at my request) because my chosen path was outside her training and certification. The prognosis for MCL is generally referred to as “Dismal” by cancer researchers and specialists..

In March 2019 I was signed off officially as being in “Spontaneous Remission”.

The Scientific studies that I refer to covered:
* Yoga
* Meditation
* Mindfulness
* Supplements: Curcumin, Turmeric, Berberine, Milk Thistle, D-Limonene, Pterostilbene, Resveratrol, Vit A, Vit D3, Beta Glucans, Green Tea, CoQ10
* I water fast for 17 hours per 24 hours – also supported by published studies.
* My diet was Ketogenic and together with the supplements was supervised by a Clinical Nutritionist (BioChemist).

This is only a brief description but I have all the supporting studies plus my full Pathology reports and scans.

As a side note, another Engineer, also diagnosed with MCL, followed my protocol under the supervision of the Clinical Nutritionist and is now officially in Remission.

I never had the slightest doubt that my “Engineering” approach together with mind/body work and nature’s foods would remediate the cancer. And I had the published science supporting my program.

The total cost to me of my treatment was less than $7000 including flights to Bali, the Yoga Teacher training and accommodation. Natural Therapists cost me less than $1000. Compare this to $600,000++ for the latest treatments in hospital – paid for by the taxpayer.

Imagine how much money the government could save if they read the science, did some validation and made it possible and acceptable to implement this style of Scientifically Proven (safe) treatment rather than the standard offerings of Chemotherapy, Radiation and Surgery.

Side effects of my treatment included NO pain, no hair loss, no nausea, plus I retained my full eneergy and mbolity.

Of course I’m only an Engineer, so how would I know anything about scientific analysis and fixing things?

So I encourage you to watch this great video by Dr Terry Wahls who did her own research using Pubmed and Google to reverse MS and now as a Medical Professor at the University of Iowa is documenting amazing results using Integrative and Functional medicine to improve the quality of life for seriously sick patients.
https://www.youtube.com/watch?time_continue=7&v=KLjgBLwH3Wc

Our bodies and our nutrition have evolved over millions of years as has the knowledge of how to eat healthily and use our natural resources to treat illness so how can this be termed “Alternative Medicine”? Industrialised Medicine which now claims to be “Conventional Medicine” has only been around for a relatively very small time and has the dubious credit of being responsible for the sickest population ever seen on this planet.

If Australian Government Medical officials and Politicians cannot see that FOOD IS OUR MEDICINE (as stated by Hippocrates) and that our current western doctors are not being educated to support patients nutritionally then we either have a serious case of “selective blindness” or maybe professional bias (driven by corporate profits?)

The discrediting of the Natural and Integrative Health Practitioners is being done purely to protect the interests of the Corporations who depend on profits from selling overpriced chemical medications and symptomatic treatments to the public health system. Cures are not profitable.

We need to have a major shift towards informed nutritional education and support to reverse the current rapidly upward trend of people with serious diseases in Australia, especially amongst young people…”