The Raw Power of Honey 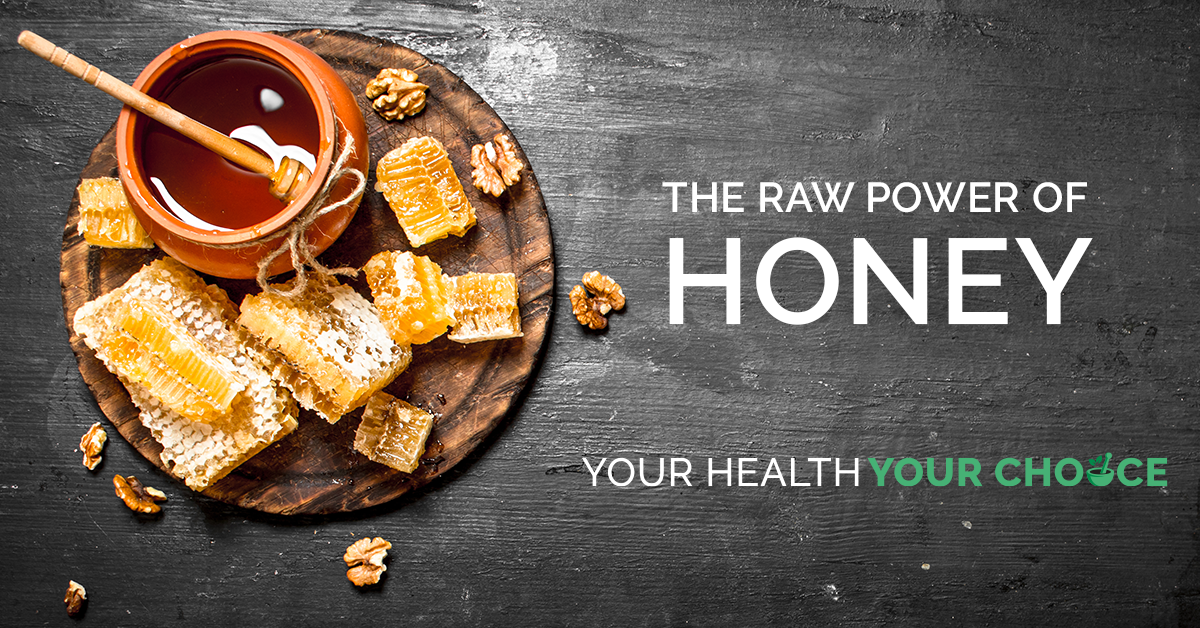 In the last decade or so, honey’s healing capabilities have been catapulted onto the scientific stage. Honey contains at least 181 components, including small amounts of vitamin C and carotenoids, making it one of the best alternative treatments for wound healing, fertility, beauty remedies and throat infections.1

The pressures on honeybee populations, resulting from threats by modern pesticides, parasites, predators and diseases, have raised awareness of the economic importance and critical role the beautiful bee plays in agricultural societies across the globe.

Our historic love affair with honey

Since ancient times, honey has been known for its nutritive and therapeutic values. There is evidence from exceptionally preserved beeswax residue from Anatolia that humans enjoyed farming and using honeybee products as early as 6000 BC.2 It has been suggested collection of wild honey to date as far back as early hominins (2.5 million years), for energy to fuel evolving brains and also to preserve certain foods.3

Honey and the honeybee have become significant symbols of sweetness and fertility in many cultures. Honey was a vital sweetener in Greek and Roman cuisine, and the ancient Greeks were fervent believers in the healing properties of honey, which was considered to be the food of the gods.4

Since ancient times honey has been used in traditional Chinese medicine. Similarly, ancient Indian texts (the Vedas and the Ayurveda) document the use of honey for spiritual and therapeutic purposes. In Hinduism honey is one of the elixirs of immortality, and in Buddhism as part of the festival of Madhu Purnima. The bible repeatedly mentions honey and the Promised Land was said to be flowing with ‘milk and honey’. In medieval Europe, it was often used as a form of currency.4

For centuries now honey has been used as an effective remedy for upper respiratory infections, wounds, burns and ulcers. In recent years there has been renewed interest in the medicinal properties of honey which are due to a multitude of biological compounds, chemical reactions, antioxidants, and antimicrobials.

Manuka honey, though very expensive, has become increasingly popular in recent years. The honey is made by bees that forage on the flowers of the manuka bush in New Zealand and some parts of Australia, including Tasmania, and contains a unique ingredient, methylglyoxal, which has specific antimicrobial properties, which is why it’s commonly referred to as the “healing honey”. Manuka honey had the lowest moisture content, indicating its resistance to microbial growth, and a longer shelf-life.5

In a recent systematic review honey was found to be superior to usual care for the improvement of symptoms of upper respiratory tract infections, particularly in cough frequency and cough severity.6

In a random controlled trial, honey was most effective in symptomatic relief of symptoms associated with the common cold in children, whilst salbutamol or placebo offered no benefit. The doses that were tested were: 7.5 mL (age 1 – 2 years), 15 mL (2 – 6 years) and 22.5 mL (6 – 12 years).7

In adults, 20.8 g of honey combined with coffee, every 8 hours for one week was more effective than steroids for persistent post-infectious cough.8

The healing property of honey is mainly due to its antibacterial activity, maintaining a moist wound condition that helps to provide a protective barrier to prevent the infection. It has proven to be effective where other wound healing agents have failed.9

According to one study, honey produces hydrogen peroxide because of an enzyme in the bees’ spit, which mixes with the nectar during the bees’ process of regurgitation. Their saliva contains glucose oxidase, and when exposed to water it breaks down glucose in honey and forms hydrogen peroxide, a commonly used antibacterial substance.10

Historically, Egyptians presented honey for fertility. Moreover, many cultures traditionally consumed honey for enhancement of vitality among males. For infertile or sub-fertile men, a drink of honey added with warm milk is believed to improve considerable amount of sperm count. Honey is known to be rich in vitamin B, an essential substance for the production of testosterone.11

In rat and mice studies honey was beneficial in improving male fertility by enhancing the sperm motility, increasing the sperm count, and improves the sperm morphology.12,13

Native stingless bees have huge cultural significance to indigenous people from many parts of Australia and have played a part in their culture for thousands of years. There are many dreamtime stories revolving around these tiny bees and the rich brown sugarbag honey is popular bush tucker.

Native honey was highly prized and often given as gifts or traded as a valuable commodity. It was also used medicinally for ‘cleaning out the gut’. The honey produced by native bees is often known as ‘sugarbag’ and contains a lot of resins from native trees such as the eucalypts.

Indigenous peoples had long known that native stingless bee honey had special health properties. Researchers from the University of Queensland have found a healthy sugar in native honey, trehalulose, which is not found in any other food.14

Stingless bee honey was traditionally thought to be good for diabetes. This research shows trehalulose has a lower GI which means it takes longer for the sugar to be absorbed into the blood stream, so there is not a spike in glucose that you get from other sugars.14

The gift of plenty

So perhaps the Ancient Greeks were correct, and bees are the messengers of the gods and honey is a source of wisdom and poetry. In Greek, the word “nectar” means “victory over death”. Honey is a truly remarkable nourishing and healing gift from mother nature.