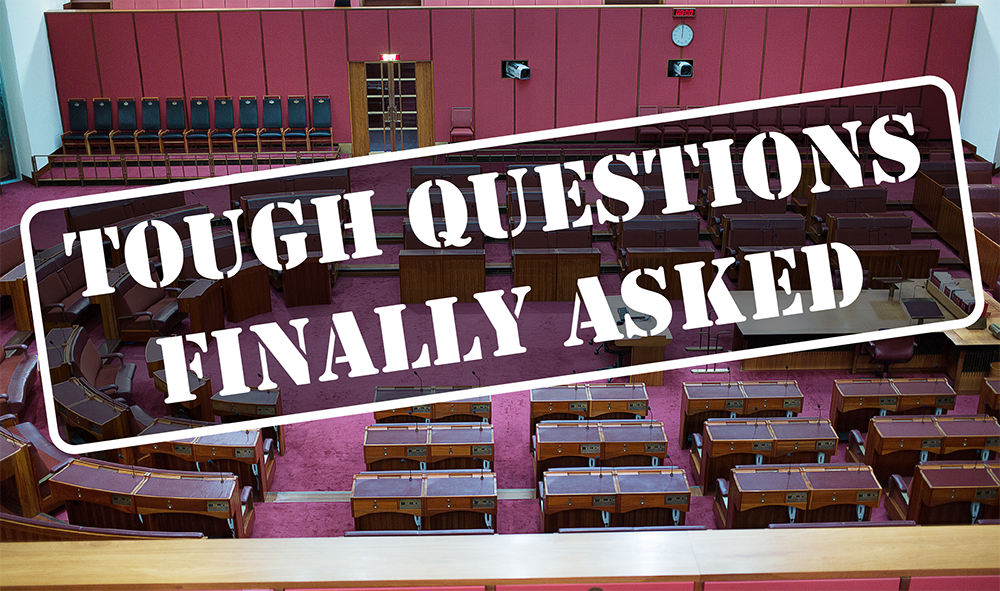 SERIOUS questions have been asked of the Federal Health Department about the quality of research it uses to make decisions about natural medicine and therapies that are used by millions of Australians.

For the first time, bureaucrats are being made to answer questions about the Department of Health’s Natural Therapies Review that it relied on to cut the Private health Insurance Rebate as well as the National Health & Medical Research Council (NHMRC) Homeopathy Review that is now in the hands of the Commonwealth Ombudsman for complaints over scientific and procedural flaws and bias.

The questions also target the Therapeutic Goods Administration (TGA) over proposals made to change the regulation of low risk products.

Senator Stirling Griff used a Senate Estimates Committee to put a total of 15 questions about natural therapies on notice to the Federal Health Department.

His questions mirror concerns raised by the Your Health Your Choice campaign and follow the Government’s announcement last year that it was cutting the Private Health Insurance (PHI) rebate for natural therapies.

Senator Griff wants facts and figures and has questioned whether reviews were conducted in a way to influence a predetermined negative outcome.

“Is there a chance that if the reviewers had been tasked with assessing the primary literature they would have found more or better evidence of clinical effectiveness of natural therapies?” he asked.

The Health Department was also asked about the future of Ayurvedic Medicine – a 5000 year old practice that includes modalities such as aromatherapy, herbal medicine, acupuncture, yoga and massage.

Senator Griff is wanting to know if an assessment on clinical effectiveness would be completed and if the rebate cut would then apply – as with other natural therapies.

Nearly half of the questions relate to the Natural Therapies Review which was used to justify the cut to the private health insurance rebate.

In 2016 the Review, which examined 15 of the most common natural therapies from yoga to naturopathy, found a lack of evidence to support “clinical effectiveness”.

The Health Department has been asked:

“How was clinical effectiveness defined for the purposes of the Review?”

“Is there a chance that if the reviewers had been tasked with assessing the primary literature they would have found more or better evidence of clinical effectiveness of natural therapies?

“Advances in Integrative Medicine, 3, 3-10 contained wide ranging criticisms of the methodology adopted for the purpose of the NT Review. Is it intended that a response will be prepared to these criticisms?”

Freedom of Information documents show the tax-payer funded Homeopathy Review conducted by the NHMRC was done twice, but the first report was never made public. The NHMRC commissioned the first report in April 2012 then fired the contractor within days of receiving the final draft report in August 2012. Its findings and existence were hidden.

Senator Griff has asked the Department for a breakdown of how tax-payer money was spent and what it was spent on.

The Homeopathy Review was completed before the Natural Therapies Review. Senator Griff wants to know:

“Is it correct that the results of the Homeopathy Review were adopted by the Natural Therapies Review?”

“Does the TGA have a preferred position in relation to the various options set out in the consultation report, and if so what are they for: Aromatherapy products? Vitamins and minerals? Homeopathic products?”

“Does the (Health) Department intend to complete the assessment of the clinical effectiveness of Ayurvedic medicine?”

“What commercial or economic impact assessments of the options under consideration has the TGA undertaken?”

“What targeted consultation with industry has the TGA undertaken in relation to the options under consideration for the future regulation of low risk products?”

“Has the TGA had any discussions with Austrade or other relevant government agencies as to the impact on exports that may result in relation to the various options under consideration? If so, what was the outcome of the discussions?”