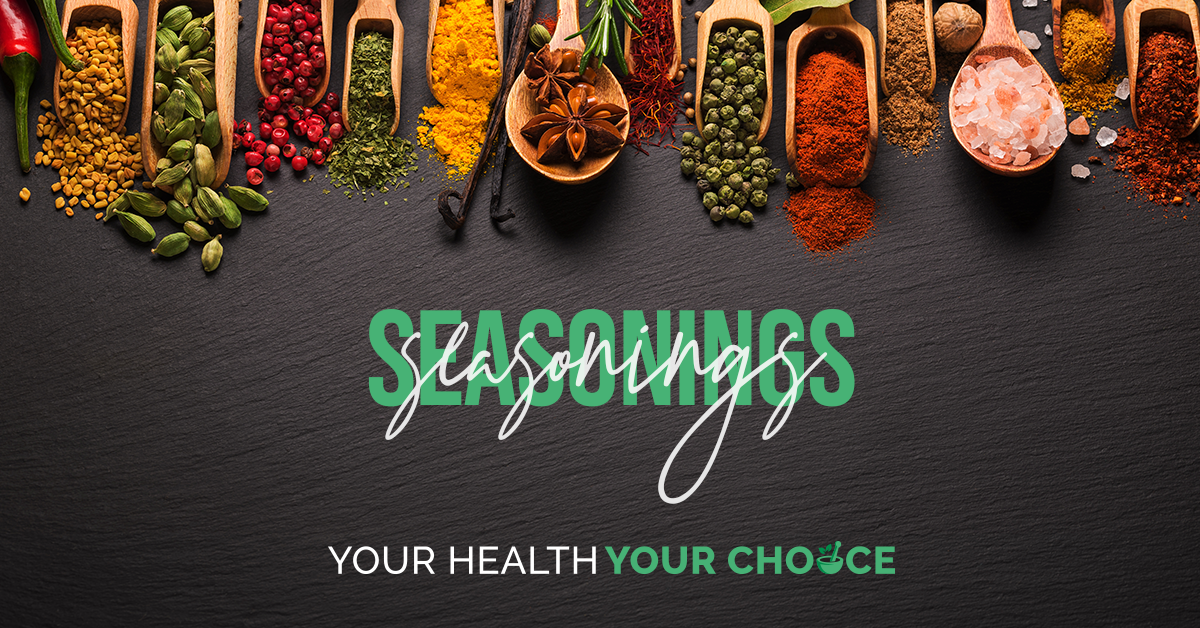 Herbs and spices have been used by all cultures for millennia to season and flavour food. For example, we all know that rosemary enhances the flavour of lamb. Similarly, tarragon goes well with chicken and fennel with fish – amongst others.

Kitchen herbs and spices not only add flavour, they also have a host of health benefits that is being shown by a growing body of research. For example, recent randomised controlled trial found that a diet rich in herbs and spices reduced blood pressure in people at risk of cardiovascular disease.

The term ‘herbs’ usually refers to the fresh and dried leaves of medicinal plants often from temperate regions and are usually green in colour. ‘Spices’ are the flowers, fruit, seeds, bark, and roots of medicinal plants often from tropical regions and range in colour from yellow to orange, brown to black or red. We are all familiar with the spice chilli, from the fruit and seeds of Capsicum annuum.

The colours and aromas of herbs and spices reflect their phyto-constituents.

For example, the distinctive golden yellow colour of turmeric (Curcuma longa) is due to the constituents curcumin and the volatile oil turmerone, which contribute to turmeric’s flavour in cooking and medicinal properties in healing. The distinctive aroma of rosemary (Rosmarinus officials) is largely due to the volatile oil 1,8-cineole, for which research exists showing it improves cognitive function.

In general, spices (e.g. garlic, mustard) have a more pungent flavour than herbs (e.g sage, thyme). Whereas spices tend to be more pungent, both herbs and spices are often aromatic.

The same plant can provide both a herb and a spice. For example, the leaves of Coriandrum sativum are used as the herb cilantro, while the seeds are used as the spice coriander.

From a herbalist’s perspective, herbs and spices are generally categorised as ‘carminatives’, ‘antimicrobials’, ‘antioxidants’ and/or ‘aromatics’; many are bitter and/or pungent.

Carminative herbs assist the body with digestion by stimulating digestive juice production and blood flow to the stomach.

Antimicrobial herbs assist the digestive tract by, for example, tonifying the mucosa and/or altering the environment in the gut to make it less conducive for unfavourable organisms to thrive. These herbs contain constituents that either kill or inhibit the growth of these micro-organisms.

Bitter herbs and spices tonify the digestive mucosa and thereby assist digestion and the liver.

Pungent herbs are usually aromatic or spicy to the taste (for example garlic, angelica, basil) and act as stimulants that correct depressed digestive function, having a ‘warming’ action on the tissues so they function better.

Many herbs and spices have unique combinations of actions. For example, the spice caraway is classified as a bitter, pungent carminative and is used to remove gas and aid digestion in European cooking and medicine. It goes well cooked with rice to aid its digestion.

All this gives us insight to the benefits of using herbs and spices in everyday cooking and why they are so good for our health. According to the ancient Greek physician Hippocrates,

“Let food be thy medicine, and let medicine be thy food”

Why is the term ‘seasoning’ often used for herbs and spices?

The term ‘seasoning’ has its origins in antiquity, from a longstanding time when plants were the basis of human health and medicine. In fact, around 80% of people worldwide rely on plant medicines for some part of primary healthcare.

American herbalist Matthew Wood describes how when northern European settlers first settled the American South, they were presented with challenges associated with being fair-skinned and coming from a cool, damp, Northern European climate. Hence they were not well suited to the area and its hot, humid climate. Others settled in areas with climates associated with unfamiliar coldness. He writes:

“All were moving from areas where their ancestors had been settled—for hundreds or thousands of years—into new and challenging territory.

It was at this time that a theory of “seasoning” developed among the new settlers. It was believed that people needed to be “seasoned,” or slowly and carefully exposed to new environments.

Thick blood is oilier, so it protects against cold and damp, like the oily wool sweater of a Scottish fisherman.

In order for the blood to adjust, it was thought necessary to use herbs and foods to thicken or thin the blood and to let people “season” for a year or two, moving slowly from region to region.”

In this era in the America South, a new type of blood-based folk medicine originated based on the use of native and introduced botanical medicines that assisted the process of ‘seasoning’ new arrivals to the new land. Back in Europe, herbs and spices had been similarly used medicinally for millennia, tailored to the seasons and patterns of ill health.”

There is so much rich meaning and history embedded in language! So next time you cook or sit down to a meal, contemplate bth the historical and medical uses and benefits of the herbs and spices that flavour your food.