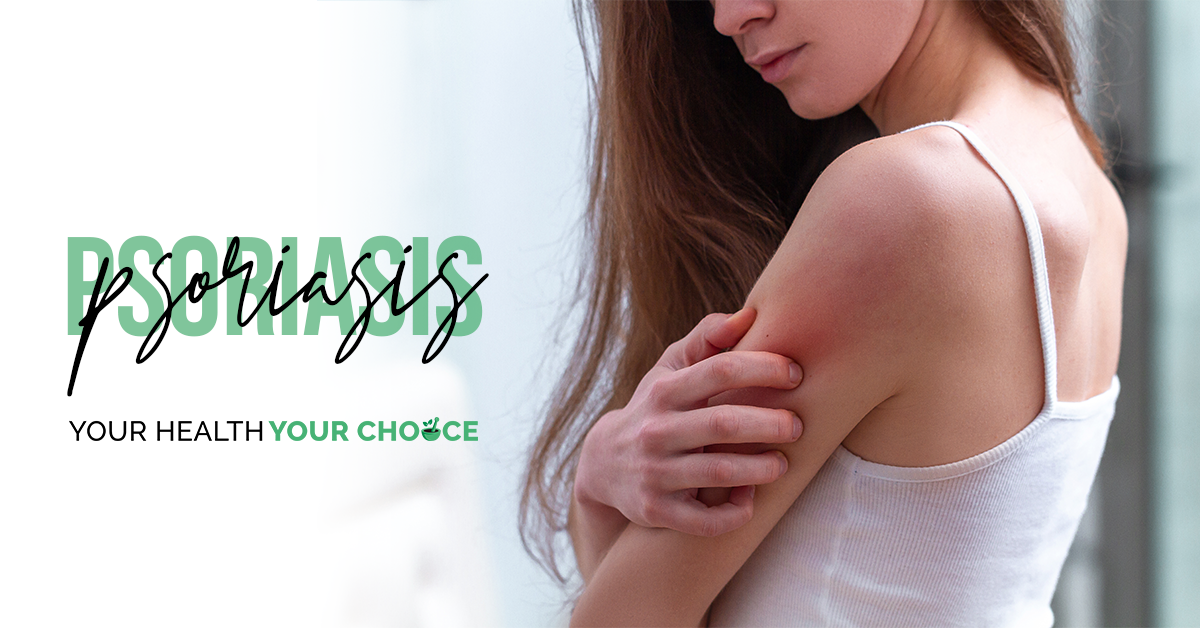 More than just a skin disease, psoriasis is an autoimmune inflammatory condition where skin cells grow and multiply too quickly which results in a build-up of rough, dry, dead skin cells. The immune system sends out faulty signals to speed up the proliferation of skin cells (keratinocytes). They then become raised, reddish-pink areas covered with silvery scales and red borders and occurs in varied areas of the body.

It is a chronic disease that involves flare ups and may show up as a few spots or involve large areas. In about 5% of cases, the person may also have some sore and inflamed joints at the same time, known as psoriatic arthritis.

More than 1.6 million Australians live with psoriasis. You can develop psoriasis at any age, though it tends to come on during adolescence and old age and develops gradually. It appears to be a genetically influenced and commonly triggered by stress. Mental stress causes the body to release chemicals that boost the inflammatory response.

Psoriasis tends to worsen with weight gain; therefore, weight management is a crucial adjunct to treatment. Flare-ups can also be triggered by common medications, like beta blockers used to control high blood pressure or heart rate, or lithium used to treat bipolar disorder. Other triggers include strep throat, injury to the skin, and respiratory infection (guttate psoriasis).1

Though psoriasis was often considered a skin condition alone, more recent literature has shown other organ involvement. These comorbidities are possibly due to a proinflammatory state with excess circulating cytokines.2

Do natural therapies play a role?

Up to 51% of patients with psoriasis report the use of Traditional and Complementary Medicine (T&CM) in their treatment regimen.3 Ultimately, T&CM is no stranger to supporting people with the above listed comorbidities and while the research into psoriasis and T&CM may be on the light side, there is adequate evidence in the realm of dealing with inflammation and immune system dysfunction.

While many psoriasis patients find great success with many different natural therapies, the T&CMs with the most robust evidence of efficacy for treatment of psoriasis are dietary modification, fish oil, Indigo naturalis, curcumin, and meditation.

Eating a healthy anti-inflammatory diet may lessen the severity of symptoms and play a role in lowering the likelihood of developing comorbidities.

Research shows people with psoriasis who followed a Mediterranean diet — an eating pattern rich in fruits and vegetables, legumes, whole grains, fish, fruit, nuts, and extra-virgin olive oil — experienced fewer severe flare-ups. This was only an association and more research is needed, but experts believe the Mediterranean diet contains many foods that have an anti-inflammatory effect in the body and may offer extra protection against psoriasis triggers.6

Early studies demonstrated the impact of a gluten-free diet in people with psoriasis who had high levels of a certain type of antibody called anti-gliadin antibodies (AGA).

Antibodies form when the body tries to fight foreign invaders. Gliadin is one of the main proteins in gluten, and it is mainly responsible for gluten sensitivity. A person with high AGA levels is likely to have celiac disease or a gluten sensitivity.

After 3 months on a gluten-free diet, 73% of people with psoriasis and AGA in their bodies saw an improvement in their condition, compared with none of the people without AGA.7

In another study, blood samples showed that about 1 in 3 people with psoriasis have high levels of AGA.8

Evidence is accumulating that vitamin D might represent a key modulator of immune and inflammation mechanisms.10 Synthetic vitamin D is the main active ingredient in two prescription psoriasis medications – Vectical and Dovonex – which are applied to the skin.

Significant associations between low vitamin D status and psoriasis have been systematically observed. Due to its role in proliferation and maturation of keratinocytes, vitamin D has become an important local therapeutic option in the treatment of psoriasis. 11

There are numerous Traditional Chinese Medicine (TCM) patterns associated with the various forms of psoriasis such as Heat in the Blood, Blood Deficiency, Qi & Blood Stasis and Disharmony of the Chong & Ren Mai. What does this mean you ask? They correlate with different presentations of psoriasis. Seek out a qualified TCM practitioner who can individualise treatment.

While many herbs are used successfully in the individualised treatment of psoriasis, one herb in particular has shown positive results in scientific studies. Indigo naturalis (Qing Dai) is a TCM herb long recognised as a therapy for several inflammatory conditions, including psoriasis.

One study identified IL-17 cytokine activity critical in pathogenesis of psoriasis, and that certain chemicals in Indigo naturalis inhibit this pathway. This study demonstrated that topical application can reduce moderate psoriasis.12

Curcumin, active ingredient in turmeric, has been frequently studied for its powerful anti-inflammatory and antioxidant properties. Curcumin research has identified its ability to decrease the expression of pro-inflammatory cytokines in keratinocytes which plays a critical role in the pathogenesis of psoriasis.13

In vitro research has demonstrated that curcumin inhibits the proliferation of psoriatic-like cells by down-regulation of pro-inflammatory cytokines, interleukin-17, tumour necrosis factor-α, interferon-γ, and interleukin-6. Apart from this, curcumin significantly enhanced the skin-barrier function by up-regulation of molecules involved in management of the epidermal skin barrier.14

Curcumin has shown considerable benefit in inflammation of the joints (common with psoriasis).15 Studies have also found it to be effective in lowering inflammatory markers along with having a lipid lowering effect in patients at risk from developing CVD.16

As stress plays an important role as a trigger in psoriasis, managing the stress response is essential. There are the basics to be mindful of such as good sleep, prioritizing tasks, moving your body, finding joy in life, and using coping strategies, such as deep breathing and exercise, will be beneficial.

The study has been duplicated through the years with the same result—mindfulness meditation makes psoriasis treatment work better and more quickly.

As you can see, stress and lifestyle play a major role in the pathogenesis and maintenance of psoriasis and its comorbidities. While we cannot remove all stress from our lives, we can certainly learn to manage our stress response and identify our triggers. A holistic and individualised approach will complement the goal of stress management nicely.

The take home message? T&CMs have had great effect in the management of psoriasis and treatment should aim to reduce inflammation, modulate the immune response, and improve patient quality of life.