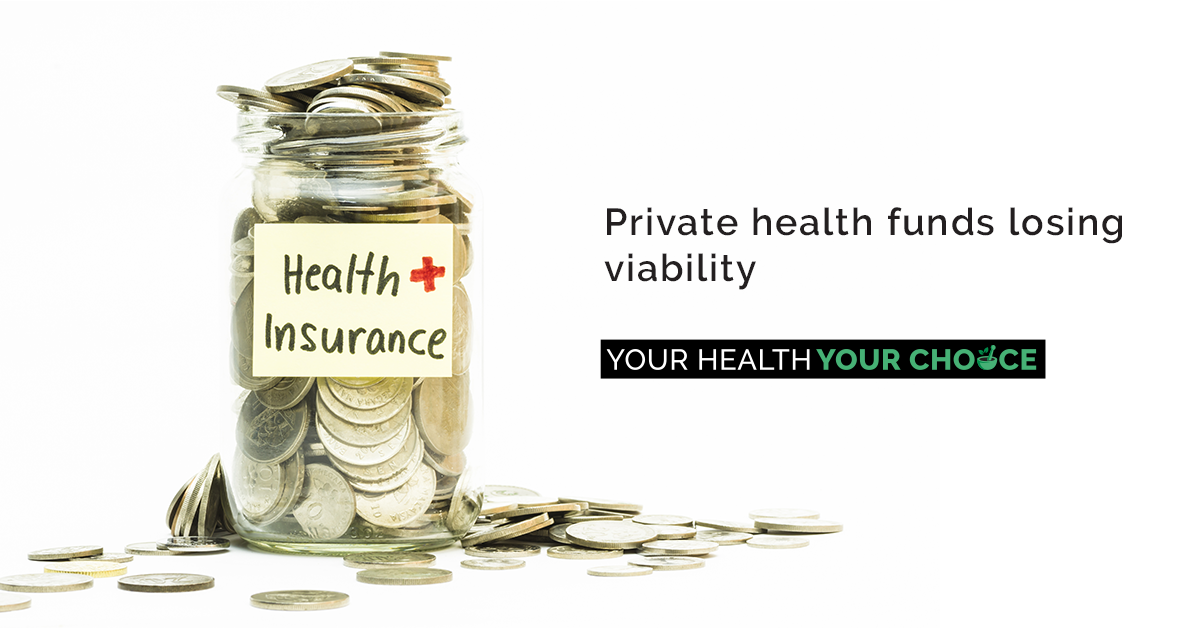 The Australian Prudential Regulation Authority (APRA)* has warned that only three private health insurers (PHIs) will be financially viable within two years if the Government and industry do not take urgent action to break out of its “death spiral”.

In a ‘blunt’ message delivered at an industry forum, APRA Board member Mr Geoff Summerhayes warned the regulator might force underperforming funds to merge if they did not control their costs or arrange their own merger.

“Over the past two years, the factors threatening the sustainability of PHIs have only become more acute. Hospital coverage has declined further. The younger, healthier cohort that financially underpins our community-rated system continues to abandon or shun private cover. Claims costs are rising faster than premium growth, cutting insurers’ profit margins. The Grattan Institute’s description of a “death spiral” may be dramatic1, but it’s also pretty accurate,” he said.

“When not even substantial taxpayer subsidies and the Medicare levy surcharge can convince a growing number of policyholders that private health insurance represents value-for-money, it’s time for a rethink.”

The reason for the industry’s ‘death spiral’ centres around people continuing to pay high out of pocket costs for private health care with reduced benefits, which is turning people away from insurance.

The private insurance system has become caught in a spiral of rising health fund payouts, fuelled by rising medical procedure costs and the departure of healthier young people, leaving behind older members who tend to make bigger claims.

This situation of falling membership, rising premiums and shrinking benefits was described by Mr Summerhayes as “stable but serious”, with a “negative prognosis” unless urgent action is taken to address it.

“We’re on the record expressing our disappointment about the industry’s progress responding to the sustainability challenge, with too many PHIs seemingly waiting for the Government to find a miracle cure. In response, we asked all insurers to submit a robust, proactive recovery plan.”

Natural therapies are widely used by an estimated 70% of Australians, yet in 2019 the Government banned PHIs from offering rebates for 16 natural therapies. This was based on advice from the Department of Health, citing reviews conducted in 2014-15 that were established for the purpose of providing a justification for the policy.

A 2019 Consumer Sentiment Survey found that 68% of Australians supported the re-instatement of private health fund rebates for natural therapies, in particular younger people.

The survey found that Millennials, in particular, are supportive of private health fund rebates for natural therapies, with 67% agreeing they should be re-instated, compared to 62% of Gen X and 55% of Baby Boomers.

Public protest catalysed by Your Health Your Choice campaign in early 2019 resulted in the Minister for Health, Greg Hunt, announcing on 9 April 2019 new reviews of 16 natural therapies to determine their eligibility for PHI rebates. The 2019-20 Natural Therapy Review is currently underway.

All eyes are now on the 2019-20 Review, which if performed properly, should identify the value of these therapies to healthcare and reinstatement of PHI rebate eligibility – and give the PHI sector a much-needed ‘natural remedy’.

* APRA is an independent statutory authority that supervises institutions across banking, insurance and superannuation, and is accountable to the Australian Parliament.

SIGN below to add your voice to the growing number of people concerned about preserving health choices and to help us keep advocating on your behalf.