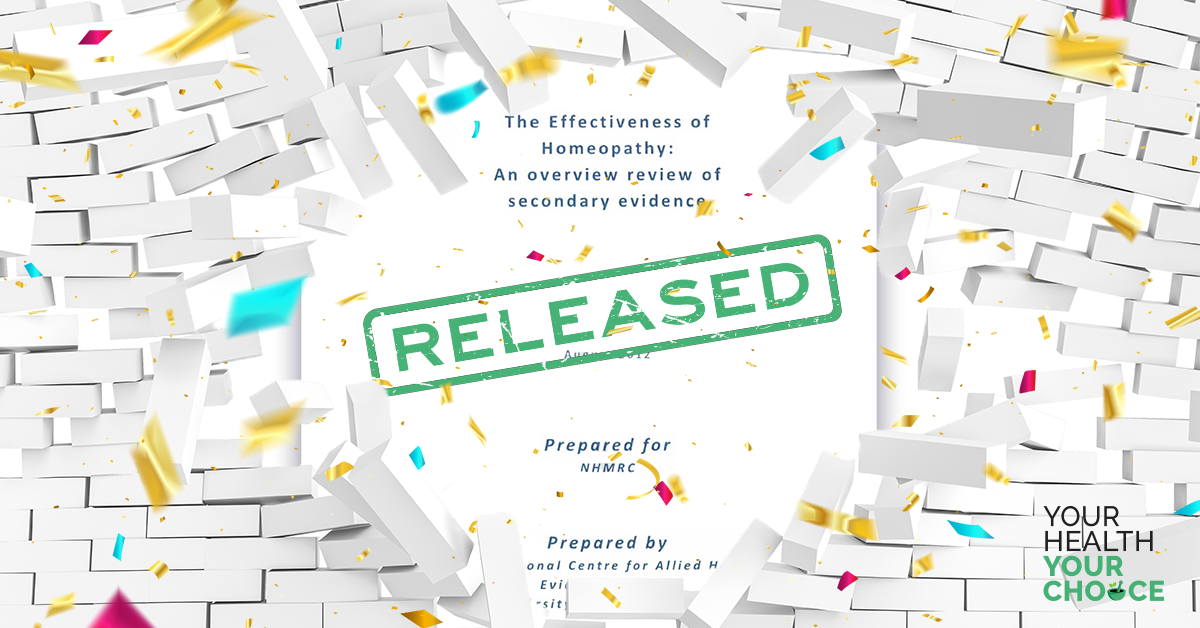 Sustained public and Parliamentary pressure has resulted in the National Health & Medical Research Council (NHMRC) releasing the first taxpayer funded report on homeopathy it commissioned and buried in 2012.

As suspected, the First Review concluded “encouraging evidence for the effectiveness of homeopathy” in several medical conditions. Despite NHMRC’s attempts to water down this finding by releasing an ‘annotated’ version, this remains the author’s conclusion.

The release also confirms the thoroughness of the work completed, resulting in a 281-page document that was presented to the NHMRC in an advanced final draft form.

Release comes after years of refusal:

After initially denying its existence, for four years the NHMRC has consistently refused to release the draft first report or any details about its methodology or findings. This has been despite repeated Freedom of Information (FOI) requests since 2015 and Senate scrutiny throughout 2018 and 2019.

On 23 July 2019, just a month before releasing the report, NHMRC reiterated this refusal in an answer to a Senate Question on Notice posed by Justice Party Senator Derryn Hinch in February 2019, stating:

“The National Health and Medical Research Council (NHMRC) has no plans to release what is referred to as the 2012 draft report. It is an incomplete draft of an overview of systematic reviews that was commissioned by NHMRC but was not finalised because the contract was terminated by mutual agreement between NHMRC and the contractor. As the contractor never finalised the draft, it did not undergo NHMRC’s usual quality assurance processes, and was not considered by the Council of NHMRC. It is not NHMRC’s standard procedure to release incomplete or unfinished documents or those that have not been through quality assurance processes.”

The same refusal was provided to Senator Stirling Griff under Senate Estimates questioning in 2018 and in responses to numerous FOI requests between 2015 and 2019.

The NHMRC’s release of the 2012 First Review of homeopathy appears strategically timed to manage public risk and controversy, in an attempt to demonstrate ‘no wrong doing’ and regain trust before undertaking new 2019-20 reviews of natural therapies, which commence in September 2019.

On 7 April 2019, the Minister for Health, Greg Hunt, announced ‘review updates’ of 16 natural therapies. The announcement came on the back of overwhelming public protest via the Your Health Your Choice campaign, which saw over 13,300 people write to the Minister protesting the removal of Private Health Insurance rebates for natural therapies.

In July 2019, the Department of Health opened public consultation on the Terms of Reference for the new 2019-20 Natural Therapy Review, which propose to again put the NHMRC in charge of conducting the reviews of 16 natural therapies.

NHMRC has been put in charge of conducting the new reviews, despite the Commonwealth Ombudsman investigating the agency for scientific and administrative misconduct over its handling of the 2012-2015 homeopathy review. This review directly informed the approach NHMRC took to the reviews of 15 other natural therapies in 2014-15 that led to removal of health fund rebates for natural therapies from 1 April 2019.

The NHMRC’s previous conduct and the Ombudsman investigation represent a significant conflict that places a cloud over its ability to be involved in reviewing any natural therapy. Your Health Your Choice has written to the Minister requesting that an impartial and independent body be put in charge instead.

The report released is ‘annotated’ in an attempt to discredit it. Any positive aspects of the evidence and/or author’s conclusions are systematically downgraded – a pattern that continued in NHMRC’s conduct of the second review published in 2015 under a new contractor (OptumInsight).

No reasons are provided explaining why the reviewer’s contract was terminated and the review author has not been given any right of reply.

In her cover letter, NHMRC CEO, Prof Anne Kelso, states the review was terminated by “mutual agreement” with the contractor. The taxpayer should ask, ‘why would a detailed report completed to its final draft stage suddenly be terminated and recommenced under a second contractor at further public expense, without any public disclosure’?

Freedom of Information requests have confirmed the First Review to be high quality, with a member of NHMRC’s expert committee overseeing the review process, Professor Fred Mendelsohn, advising NHMRC in mid-July 2012 that:

“I am impressed by the rigor, thoroughness and systematic approach given to this evaluation [….] Overall, a lot of excellent work has gone into this review and the results are presented in a systematic, unbiased and convincing manner.” (NHMRC FOI 2016-17-016-12).

The reviewer’s contracted was abruptly terminated on 3 August 2012, ‘following discussions with the contractor’, within days of NHMRC receiving the final draft report which is marked ‘August 2012’ (NHMRC FOI 2014-15-021-10).

The First Review was conducted by a highly respected and experienced reviewer from the International Centre for Allied Health Evidence (iCAHE), University of South Australia. The reviewer is a principal author of NHMRC’s own seminal guidelines on how to review health evidence (‘NHMRC additional levels of evidence and grades for recommendations for developers of guidelines 2009’), using the ‘FORM’ method approved by NHMRC Council.

These guidelines formed the basis of the “rigorous approach that has been developed by Australian experts in research methods” that NHMRC said it applied in the second attempt at reviewing the evidence published on 11 March 2015 (NHMRC Information Paper, p.9-10 & Appendix C), but that closer scrutiny reveals was in fact not the case.

The reviewer had previously published multiple reviews using the widely accepted method she had developed for the NHMRC, including projects conducted in collaboration with NHMRC, without any problems.

What went so wrong this time?

SIGN and SHARE www.yourhealthyourchoice.com.auto safeguard your right of choice in healthcare against public sector bias and cover up.