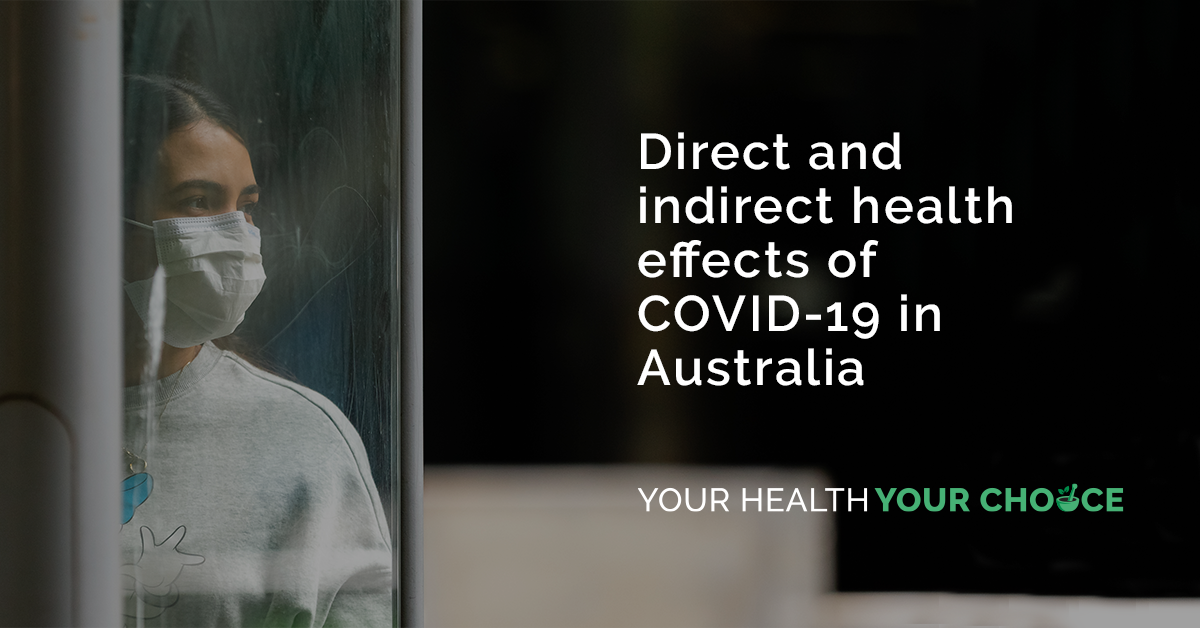 A new report by the Australian Institute of Health and Welfare (AIHW) into the health effects of COVID-19 on Australians during 2020 and early 2021 was released on 10 September 2021.

The report, ‘The first year of COVID-19 in Australia: direct and health effects‘, includes analyses of the years of healthy life lost, international comparisons and impacts on population groups, mental health and the health system.

The report includes data from a range of sources covering 2020 and some which cover up to June 2021. It does not include data from the latest (and largest) wave of cases that began in June 2021, dominated by infections of the Delta variant.

‘As the COVID-19 situation continues to evolve rapidly and we face challenges such as the emergence of new variants of the virus, it is important we look holistically at the direct and indirect health effects of the Pandemic on Australians,’ said AIHW spokesperson Dr. Lynelle Moon.

– From 1 July 2021 (since the Delta variant has been responsible for new infections), the number of confirmed infections has more than doubled and associated with a case fatality of 0.4% – around 90% lower than that associated with the previous Alpha variant.

The following summary is courtesy of the AIHW report:

A full account of the direct health effects of the Pandemic is covered in the AIHW report. Following are some key points:

The first year resulted in the following numbers of cases and deaths in Australia:

Up to the end of 2020, there were around 28,500 cases of COVID-19, with 2 distinct peaks (or ‘waves’)—one in March/April (affecting all states and territories with most infections being acquired overseas) and one in June to September (mainly affecting Victoria with most infections being acquired via community transmission). In 2020, the majority of cases were notified in Victoria.

There were around 900 deaths from/with COVID-19 in Australia in 2020 (909 notified through surveillance systems and 866 registered and compiled by the ABS).

Hospitals were protected from being overwhelmed

The key aim of protecting hospitals was achieved. During 2020, around 12.5% of people with COVID-19 were admitted to hospital for treatment of the disease.

There were just over 8,400 disability-adjusted life years (DALYs) lost in 2020 from COVID-19 in Australia; 97% of this disease burden was from fatal cases. This is much lower than the burden due to leading diseases in Australia. For example, coronary heart disease (CHD) was responsible for around 312,000 DALYs in 2018.

Some groups in the population were more affected than others

During 2020, 7% of all COVID-19 cases in Australia and 75% of all deaths were in people living in residential aged care facilities.

Up to early July 2020, it was estimated that health care workers in Australia were 2.7 times as likely to contract COVID-19 as the general community.

This community comprises 3.3% of the Australian population but only 0.5% of all cases despite being at increased risk of severe COVID-19 disease or death.

As at 25 April 2021, there have been 153 confirmed cases and no COVID-related fatalities among Aboriginal and Torres Strait Islander peoples.

If Australia had experienced the same crude case and death rates as 3 comparable countries— Canada, Sweden and the United Kingdom—there would have been between 680,000 and 2 million cases instead of the 28,500 that did occur, and between 15 and 46 times the number of deaths.

If Australia had experienced the same rates as New Zealand, there would have been around 18,000 fewer cases and 780 fewer deaths.

There were fewer deaths from other causes

Age-standardised death rates for influenza and pneumonia, and chronic lower respiratory infections were lower in 2020 than the previous 5-year average, and were particularly low during the winter months.

During 2020, rates of laboratory-confirmed influenza were substantially lower than expected from April onwards.

There was also a reduction in injuries due to falls and road traffic accidents, with fewer presentations to hospital emergency departments and road deaths

There were adverse impacts on mental health for young people

The proportion of people experiencing severe psychological distress also continued to be higher in April 2021 (9.7%) than in February 2017 (8.4%).

The number of deaths by suicide in NSW, Victoria and Queensland have remained at similar levels to previous years.

NOTE: As the AIHW report looks at data up to April 2021, it does not capture or assess the mental health impacts of new lockdowns that have been put in place since the Delta variant of the SARS-CoV-2 virus has predominated from July 2021. There are indications that in Australia, as in many other countries, mental health impacts of lockdown during the Delta wave are again on the rise.

There was a mixed picture for health behaviours, with some people improving and some worsening

From data for the period April to June 2020:

– Of those adults who usually drank alcohol, 20% had increased their consumption compared with before COVID-19 restrictions. Different data sources showed that between 13% and 27% had decreased it.

COVID-19 and associated causes of death

The AIHW report also presents data on COVID-19 and its associated causes of death. Associated causes are causes that contributed to the death and can be either conditions listed in the causal sequence (the chain of events leading to death), or pre-existing chronic conditions.

A number of conditions have been shown to increase risk of death due to COVID-19, such as cancer, chronic kidney disease, type 2 diabetes, respiratory disease, heart disease and hypertension (British Heart Foundation 2020, Ng et al. 2021).

The AIHW report provides associated cause of death data based on provisional mortality data from the Australian Bureau of Statistics (ABS) based on death registrations in Australia. Key findings include:

– Overall in 2020, 88% of deaths due to COVID-19 had associated causes listed on the death certificate.

– Almost three-quarters (73%) of COVID-19 deaths were among people who had pre-existing chronic conditions.