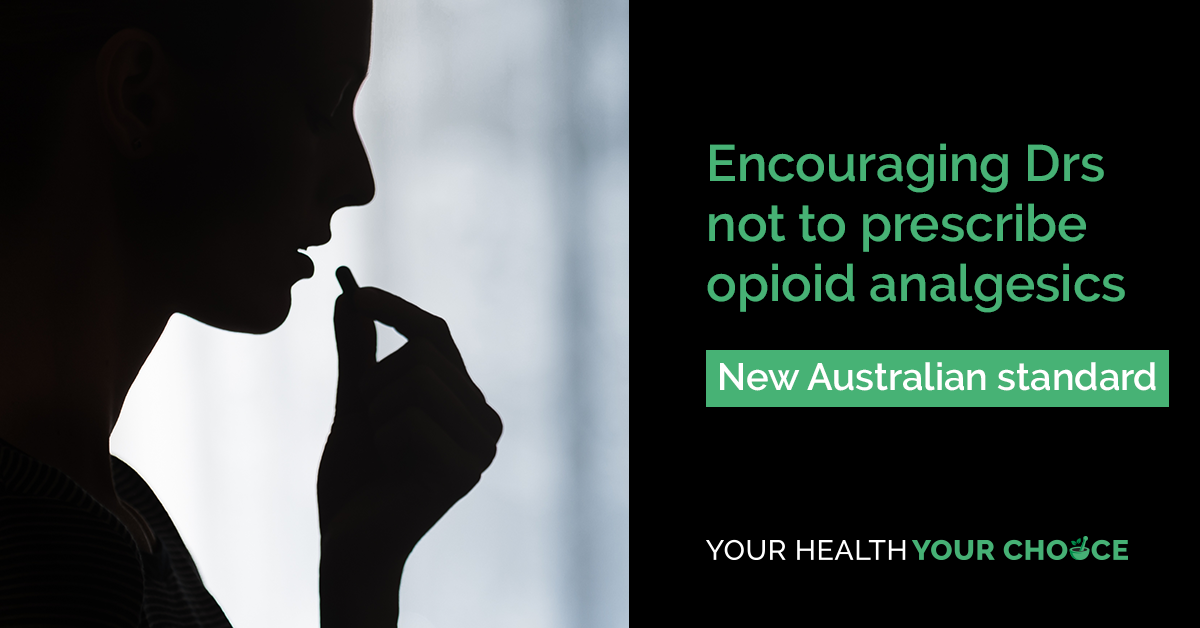 The following media release was issued by the Australian Commission on Safety and Quality in Health Care on Wednesday 27 April 2022:

A new standard of care will help thousands of Australians at risk from long-term reliance on opioid analgesics following short-term use for acute pain in hospital.

Released today, the first national Opioid Analgesic Stewardship in Acute Pain Clinical Care Standard, developed by the Australian Commission on Safety and Quality in Health Care (the Commission), sets out appropriate use of opioid analgesics in the emergency department and after surgery.

The new standard encourages doctors to consider alternate analgesics and, where opioids are required, promotes planning for their cessation.

Every year, more than 2.5 million people undergo surgery in public and private hospitals [1], some of whom become persistent users* of opioid analgesics after being treated for acute pain.

Opioid analgesics include oxycodone, morphine, buprenorphine, hydromorphone, fentanyl, tapentadol, tramadol and codeine, which are sold under a variety of trade names. More than three million people have at least one prescription dispensed each year for opioid analgesics. [2] While these medicines play an important role in managing certain types of pain, they also carry potential for harm.

As well as nausea, drowsiness and respiratory depression, long-term use of opioids can lead to dependence and even unintended overdose.

Conjoint Professor Anne Duggan, Commission Chief Medical Officer, said there is a need to care for people who leave hospital after being prescribed opioids. A national survey found that 70% of hospitals send people home after surgery with opioids ‘just in case’. [3]

“Opioid analgesics are incredibly effective in providing pain relief for severe acute pain,” she said. “However, we must remember that these medicines can have significant adverse effects and may put people at risk of harm after they leave hospital.

“We need to fine-tune our prescribing and use of opioids analgesics for acute pain, to reduce the harms associated with inappropriate prescribing and avoid short-term use becoming a long-term problem.

“Ensuring adequate pain relief to avoid unnecessary suffering while minimising the risk of over-reliance on opioid analgesics is not an easy balance to strike. It is critical that when patients are discharged from hospital, there is a discussion with the patient and a clear medication management plan to wean off opioids,” Professor Duggan said.

Since 2018, the Therapeutic Goods Administration has introduced regulatory reform for opioid analgesics to minimise harm and limit inappropriate prescribing. This includes changes in June 2020 to opioid listings on the Pharmaceutical Benefits Scheme and smaller pack sizes for immediate-release opioids. [4] Recent data suggest Australia’s use of opioid analgesics is declining since the introduction of the regulatory reforms.

Conjoint Associate Professor Jennifer Stevens, Anaesthetist and Pain Management Specialist at St Vincent’s Hospitals Sydney, said there is large variation in how opioids are prescribed around Australia. She said the standard provides guidance for all patients to receive the same level of evidence-based safe and effective opioid prescribing.

“The clinical care standard encourages the use of simple analgesics such as paracetamol and anti- inflammatory medicines and non-medication techniques for mild to moderate pain. For severe acute pain, the standard recommends judicious opioid use,” said A/Professor Stevens.

“As prescribers, doctors have an ‘opioid-first’ habit that we need to kick. Compared to many European and Asian developed nations, Australia places a high reliance on using opioids as first-line analgesia, despite evidence those countries with significantly lower reliance do not have poorer pain outcomes.”

Dr Andrew Sefton, Orthopaedic Surgeon at Dubbo Base Hospital NSW and North Shore Private Hospital Sydney, said it was important for prescribing doctors to consider how and when opioids will cease after discharge.

“It might be quick and easy to provide a repeat on an opioid prescription when we have a patient experiencing pain, but we need to reflect on the individual patient to ensure the benefit outweighs risks.

“The clinical care standard highlights the need to support transition of care into the community, with communication and plans for opioid cessation. Providing the patient’s GP with a plan outlining the expected duration of opioid use and the amount of opioids supplied is a practical way to work together.”

Professor Duggan concluded: “It is ironic that a medication that is designed to reduce pain for patients can in turn create long-term anguish for an individual who becomes a persistent user of opioid analgesics once they leave hospital.

“We hope this standard will provide a turning point for Australia to reflect on our opioid use in hospitals, to ensure that we are providing the safest possible care to our patients as they recover and return to their regular activities in the community.”

* Persistent users are people who use opioid analgesics for more than 90 days after discharge from hospital.

1 Australian Institute of Health and Welfare (2019). Surgery in Australia’s hospitals – Hospitals at a Glance 2017- 18. Canberra: AIHW

4 Therapeutic Goods Administration (2021), Prescription opioids: What changes are being made and why. Canberra: TGA