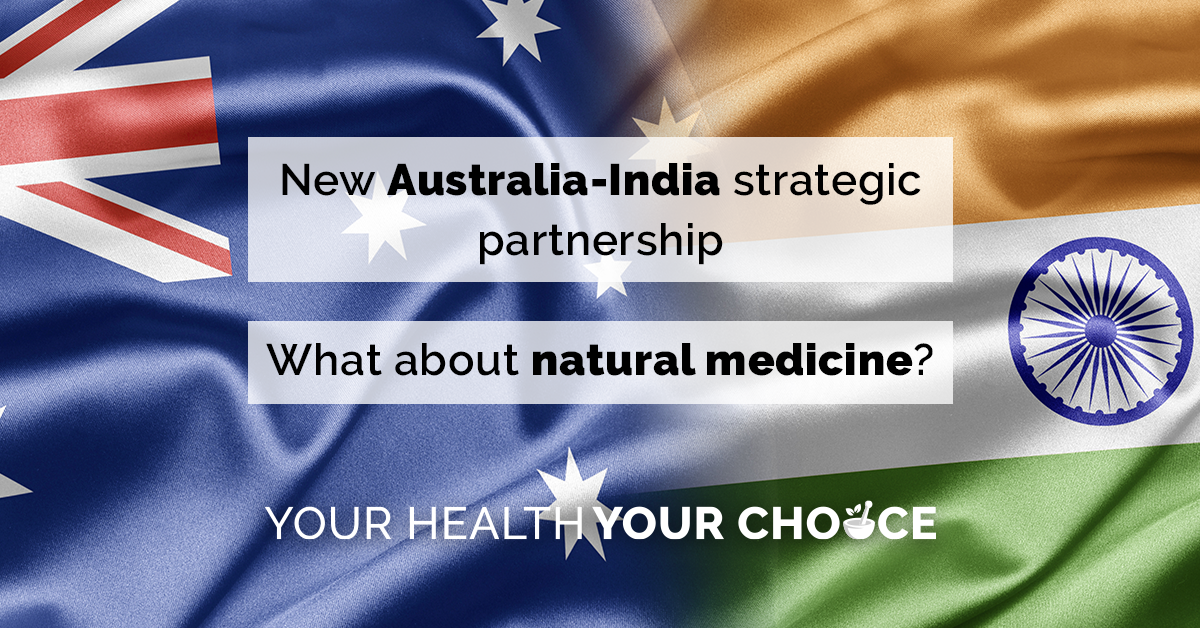 The Australian Government recently announced that it will establish a new Centre for Australia-India Relations to help foster new ties and support expanding exchange and cooperation with India.

This is part of a broader comprehensive strategic partnership (CSP) between Australia and India, which includes the recent signing of a trade agreement with India, the Australia-India Economic Cooperation and Trade Agreement.

The initiative includes engaging Australia’s rich Indian diaspora community, which from 2020 has become the second-largest overseas-born migrant group (721,050-strong) behind those of UK origin.

What about natural therapies?

India is a multicultural society where people of different background use different medicines. In recent times it has experienced a growing public trend to integrate standard biomedicine with traditional and complementary medicine (T&CM) health systems that offer holistic and individualised treatment.

This has proved highly popular with India’s 1.4 billion population. In India, T&CM systems including Ayurveda, Yoga, Naturopathy, Unani , Siddha and Homoeopathy are used by hundreds of millions of patients in primary healthcare settings, either stand-alone or alongside conventional care.

The Indian Government formally acknowledges and supports the major traditional medicine systems used by its large populace, which operates under a well-developed ethical and regulatory framework.

It has created the Ministry of Ayurveda, Yoga and Naturopathy, Unani, Siddha and Homoeopathy (AYUSH). AYUSH is responsible for ensuring the optimal development of these health systems and their dissemination in mainstream health care, including education, research centres and international partnerships.

This integration of T&CM with conventional medicine gives Indian citizens access to an integrative, affordable and popular ‘cafeteria-style’ approach to healthcare.

India and Australia are neighbouring Commonwealth countries, but when it comes to healthcare this is where the similarity ends.

While India has implemented measures to integrate T&CM, successive Australian governments have pursued retrograde policies that have limited, rather than expanded, its citizens’ access to T&CM services and has also made them less affordable.

This is epitomised by the removal of Australians’ access to private health insurance rebates for natural therapies, a policy that was conceived under the former Labor Government in 2012 and enacted by the Coalition Government in 2019. This was supported by the Greens, which in 2018 even aligned themselves with an anti-natural medicine lobby group in a failed attempt to restrict community access to complementary medicines. The Coalition’s ongoing lack of support for T&CM has been mirrored by regressive policies put forward by Labor in recent years.

Another example of the medical establishment’s patch-protective stance towards T&CM includes the Medical Board of Australia’s recent attempt to restrict medical practitioners from offering their patients integrative T&CM treatment options, potentially impacting hundreds of thousands (if not millions) of patients. The MBA only backed down due to a sustained public awareness campaign catalysed by Your Health Your Choice, which generated the largest number of public submissions the MBA had ever received.

Safeguarding equitable access to therapeutic services and medicines should not require such measures.

In 2018, the Director General of the Central Council for Research in Homoeopathy (CCRH), an apex research organisation under the Indian Ministry of AYUSH, wrote to the CEO of the National Health & Medical Research Council (NHMRC) inviting an ‘open a dialogue for exchange of knowledge and experiences regarding the health and economic benefits of the integration of traditional medical systems into mainstream healthcare.’ The NHMRC provided no response to this formal government-to-government invitation – an official snub.

Australia out of step with international best practice & obligations:

Australia is an ethnically diverse, multicultural society and people have a Constitutional right to access healthcare and products of their choice, in accordance with cultural and historical use. Yet Australia fosters an entrenched, inwardly-focussed medical culture that is out of step with the needs and wishes of Australia’s multicultural matrix and the widespread use of T&CM in the broader community.

By contrast, other developed nations have taken a more inclusive and community-oriented approach that acknowledges the important contribution that T&CM can play in healthcare.

This is especially pertinent, since Australia has a formal agreement with Switzerland ‘to maximise international cooperation’, ‘to ensure consumers have timely access to high quality, safe and effective therapeutic products’ – yet continues to ignore how the Swiss experience of supporting T&CM services and medicines could similarly benefit Australians.

Australia’s approach to T&CM health systems is incongruous with its obligations as a signatory to the World Health Organisation (WHO) Traditional Medicine Strategy 2014–2023. The WHO Strategy’s goal is to ‘Improve equitable access to safe, quality and effective T&CM services’, in order to meet communities’ needs and build sustainable and culturally sensitive primary health care’.

Successive Australian governments continue to ignore this obligation, which has never made it onto the health bureaucracy’s priority list.

Will the Australian Government honour the spirit of its India partnership in relation to holistic healthcare?

When it comes to holistic healthcare, while Australia’s new strategic partnership with India highlights deficiencies in Australia’s approach to T&CM, it also provides an opportunity for Australia to learn from India’s experience and implement a parallel integrative healthcare approach.

This would be consistent with one of the partnership’s aims, ‘to enhance science, technology and research collaboration’, including ‘sharing the benefits of scientific and medical research and development and strengthening healthcare systems’.

One of the principal ways India has strengthened its healthcare system is by integrating T&CM. This would be as popular in Australia as it is in India – especially since 2 in 3 Australians already utilise T&CM.

What’s stopping progress? The difficulty lies in an entrenched, conservative biomedical mindset that is mirrored by a health bureaucracy that serves it.

Join to help protect your right of choice in healthcare.