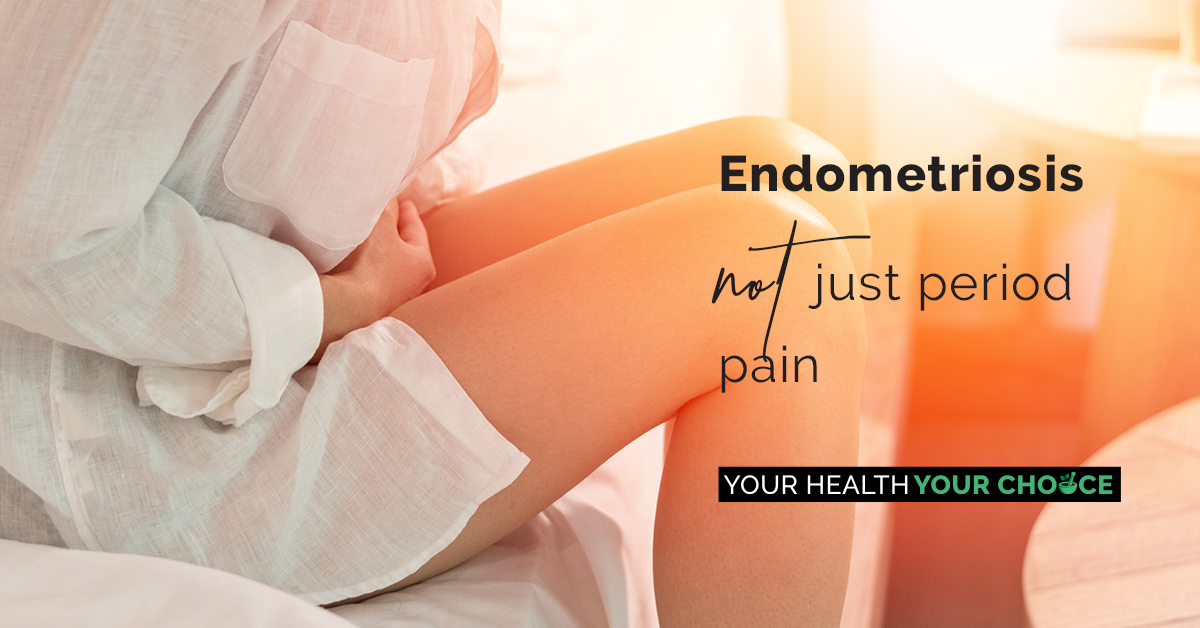 Endometriosis is a debilitating and painful inflammatory disease that affects 11 per cent of Australian women of reproductive age.

Tissue similar to the tissue that forms the lining of the uterus (endometrium) grows outside of the uterus, often implanting on multiple organs, causing chronic pelvic pain and infertility. Pain often coincides with menstruation and ovulation but can strike at any time, especially if endometrial growths affect other organs.

It is all too often written off by doctors as “just period pain”.

This condition often starts in adolescent girls. Alarmingly, it is estimated the prevalence of endometriosis amongst girls with pelvic pain may possibly be as high as 70.%

It is no overstatement that women’s quality of life, libido, emotional health, and relationships suffer dramatically. A survey of 13,500 sufferers in the UK alarmingly showed that up to 50% of sufferers contemplated suicide. They reported that the pain was so great, diagnosis took too long, and they did not feel supported or heard by the medical profession.

The exact cause of endometriosis is still unclear but retrograde menstruation is a common theory. This is a woman’s menstrual blood flowing back through the fallopian tubes into the pelvic cavity, instead of leaving through the vagina during her period.

However, retrograde menstruation is present in up to 90% of healthy women, so why do some develop endometriosis?

Experts believe it is strongly genetic or a combination of genetics, oestrogen dominance, oxidative stress, and immune dysfunction.

Diagnosis can take many years

Many women face misdiagnosis, enduring this painful disease for many years. Cases take an average of 6.7 years to receive a diagnosis, and sometimes up to twelve or more years before symptoms are taken seriously and a formal diagnosis made. This should not be happening.

Despite more than 50% of young women having pain with every period, only 13% considered something might be wrong, therefore not seeking proper care for many years. Furthermore, just over half of school-aged women had even heard of endometriosis, highlighting the need for community awareness campaigns.

Another major difficulty is the lack of training in pelvic pain assessment and management. No health professionals currently leave their training with all the skills required to manage the needs of a woman with endometriosis. Many women also complain that there seems to be a shortage of properly trained surgeons that are experienced with endometriosis.

Rather than just going to get a simple blood test, women must undergo invasive laparoscopy to be diagnosed, further preventing timely diagnosis. This involves a tiny camera being inserted near your navel to look for lesions, and if needed, instruments used to remove endometriosis are inserted through small cuts near the pelvis.

Symptoms of endometriosis vary widely between sufferers. Co-morbidities such as hypothyroidism, fibromyalgia, chronic fatigue syndrome, autoimmune diseases, allergies and asthma are all significantly more common in women with endometriosis.

Severe pain:  The migrated endometrial cells (benign growths) behave as though they are inside the uterine wall, reacting to monthly surges of oestrogen, causing severe pain. These growths may swell and bleed in the same way the lining inside of the uterus does every month.  Pain may accompany passing stools, with urination, and during or after sex, and can be felt in the abdominal cavity, the lower back and the legs.

“That stabbing pain on one or both sides – associated with difficulty walking or preference for the fetal position, that can refer to the back or front of the legs, and is helped by a heat pack – is commonly due to spasm in obturator internus (deep pelvic muscle). It improves briefly after surgery, possibly due to the muscle relaxant and change in activity, but then usually recurs. Endometriosis may have prompted the pelvic muscle spasm initially, but once established pelvic muscle spasm (commonly with a central pain component) may persist even after lesion removal.”

Infertility: About one-third of women with endometriosis struggle to fall pregnant. There is a growing consensus that endometriosis-related infertility is associated with immune dysregulation. The resulting immune-driven inflammation is believed to reduce fertility.

Fatigue: This can be profound exhaustion and can also signify a looming pain episode. The main cause of endometriosis-related fatigue is the body’s continued effort to eliminate the diseased tissue. While the immune system attempts to combat endometriosis, cytokines (also known as inflammatory toxins) are secreted by the tissue, causing fatigue.

Incontinence: if the bladder is involved there will be increased frequency, urgency and inability to hold its contents. This can present identically to cystitis and should be investigated further.

Gastrointestinal symptoms: found in over 60% of sufferers include cramping, painful bowel movements and diarrhoea. Irritable Bowel Syndrome (IBS) and Small Intestinal Bacterial Overgrowth (SIBO) have overlapping symptoms. Endo can be an underlying cause of these. Often these women will experience dramatic bloating due to the inflammatory process, known as ‘endo belly’ making them look 9 months pregnant.

Other endometriosis signs, symptoms and complications:

– The endometrial growths may block fallopian tubes contributing to infertility
– Trapped blood in the ovaries can form cysts
– Widespread pelvic inflammation (swelling)
– Forming scar tissue and adhesions (type of tissue that can bind your organs together). This scar tissue may cause pelvic pain and contribute to infertility
– Nausea, constipation, diarrhoea, or blood in your urine during your period
– Depression, anxiety, suicidal ideation

What are treatment options?

Sadly, between 20-40% of women either don’t receive effective relief or find the side effects too severe to continue medication.

More women are looking for methods that address the root of the problem and find relief with Traditional and Complementary Medicine (T&CM).  Thankfully, including T&CM in your endometriosis care plan does not preclude the use of conventional treatments. Seek out professional T&CM practitioners for support that is suited to your individual case. A team of practitioners may bring the best outcome.

This is far from a complete list of therapies. Many practitioners will prescribe an individualised treatment plan grounded in current evidence and years of clinical practice. The following are some of the key players backed by clinical research.

NAC increases glutathione, one of the most powerful detoxifiers naturally produced in the body. NAC has been shown to reduce endometrioma size, associated with decreased tissue inflammation and cell invasiveness. One study showed that women with endometriosis who wish to become pregnant and are treated with a preparation containing N-acetyl cysteine, alpha lipoic acid and bromelain experienced a significant improvement in endometriosis-associated pelvic pain and required lower intake of pain relief medication.

Not just a sleep hormone, melatonin is also shares an intimate relationship with the reproductive system. In one study women were able to reduce their pain medication as the treatment (10mg of melatonin daily for 8 weeks) reduced daily pain scores by 40 per cent and improved sleep quality. Melatonin is proving to be an important analgesic, antioxidant, and anti-inflammatory agent.

Curcumin has also been shown to moderate oestrogen and is antioxidant, anti-inflammatory, and antiproliferative.

Pycnogenol derived from Pine Bark has been studied and shows the capacity to reduce many of the painful symptoms of endometriosis.

While TCM may not be able to cure endometriosis, it has been shown to mitigate symptoms and reduce proliferation of endometrial growths. A meta-analysis showed that treatment with Bushen Huoxue, a traditional Chinese medicine consisting of ten herbs, was similar to Western medicine in the ability to improve endometriosis-related symptoms.

According to the results of a randomized, double-blind, placebo-controlled study, potentized oestrogen was significantly more effective than placebo for reducing endometriosis-associated pelvic pain and depression.

Endometriosis appears to be associated with an increased presence of pathogenic Gardnerella, Shigella, Proteobacteria, Enterobacteriaceae, Streptococcus spp. and Escherichia coli. These bacteria produce inflammatory molecules along with oestrogen metabolites.

There is now also evidence that normal flora within the gut may affect pain by affecting neurologic pathways. Therefore, lactobacillus may be useful for relieving endometriosis-related pain. More studies are needed.

An in vitro study showed Lactobacillus rhamnosus have a protective role on endometrial growth by reducing pH and thereby reducing some pathogenic bacteria and excess oestrogenic metabolites.

Further studies can clarify whether the association is causal, and whether dysbiosis (disruption of the gut microbiota) leads to endometriosis or endometriosis leads to dysbiosis.

Diet has been shown to be a powerful adjunct to the endometriosis treatment plan. The goal is to reduce oestrogen overload and inflammation firstly by cutting out all refined carbohydrates and sugar and keeping animal fats or refined plant oils to a bare minimum.

It is imperative that natural detoxification pathways in the liver are enhanced to be clear the excess toxic form of oestrogen known as oestrodiol, by eating broccoli sprouts, broccoli, cabbage, Brussel sprouts, and cauliflower.

These foods contain B vitamins and a specific phytochemical, which helps to break down the oestradiol into the safer oestriol form for excretion. High fibre foods will then encourage clearance of oestrogen via the bowel.

Research has demonstrated that long-term intake of omega-3 fatty acids results in lowered risk of endometriosis. An in vitro study showed omega-3 reduces survival of endometrial cells and may be useful in the management of endometriosis by reducing the inflammatory response and modulating cytokine function. Omega-3 is sourced from oily fish, flaxseed, chia seed, and hemp seeds.

NICM researchers at the Western Sydney University are currently seeking participants to be involved in a clinical trial examining the effectiveness of a modified traditional Chinese herbal medicine for endometriosis related pain and fatigue. Join the NICM study here.

Resource for finding a skilled surgeon experienced with endometriosis

Government initiatives and funding for endometriosis