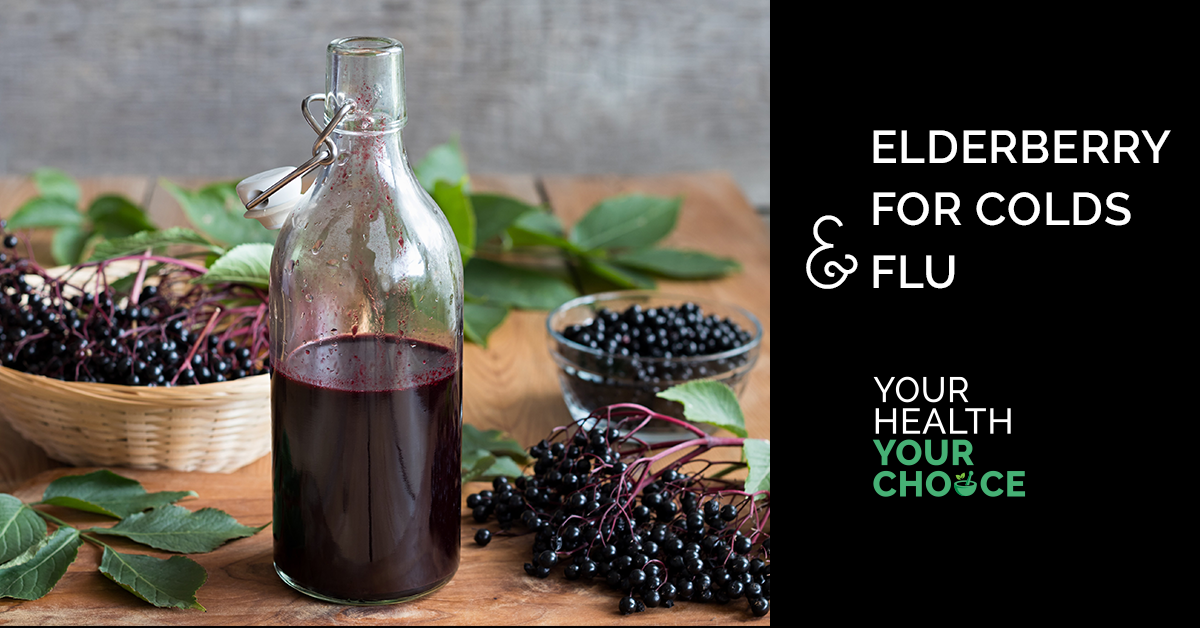 Winter is coming and with it seasonal cold and flu viruses.

With orthodox medicine having little on offer to combat colds and flus, researchers and health authorities are turning to botanical medicines for answers. For millennia, cultures across the world have traditionally used a wide range of plants to assist the body in dealing with seasonal viral infections.

Despite modern scientists often struggling to explain the medicinal benefits of herbs due to their multi-ingredient nature, research evidence is emerging authenticating the age-old uses of many herbs.

One such herb is Elder (Sambucus nigra), a tree naive to Europe and North America, where it has held an important place in folk and traditional medicine to assist people in dealing with a variety of health issues, including colds and flus.

The fruit of the Elder – Elderberries – are small, antioxidant-rich fruits that are still commonly consumed as a jam or wine. Elderberry extract is also available commercially in tablet or syrup form.

A recent study by a group of Chemical and Biomolecular Engineering researchers from the University of Sydney’s Faculty of Engineering and IT has identified how the ripe berries of Elder help with influenza.

The group performed a comprehensive assessment showing how the phytochemicals in Elderberry can directly inhibit the flu virus’s entry and replication in human cells, and help strengthen a person’s immune response to the virus. They found that Elderberry exhibits multiple modes of therapeutic action against influenza infection, reducing symptoms and severity of the virus.

The study showed that phytochemicals from Elderberry stimulate the immune system against the virus and also directly inhibit the virus’ entry and replication in human cells.

As well as being effective at stopping cells being infected, the researchers were surprised to find that Elderberry phytochemicals had a considerably stronger effect in the post-infection phase, when cells had already been infected with the virus.

The study supported both direct effects of Elderberry extract by blocking viral glycoproteins, as well as indirect effects by increased expression of certain cytokines, which are secreted by certain cells of the immune system and work together to coordinate a defence against invading pathogens.

This study supports the findings of other studies showing the effectiveness of Elderberry’s activity against influenza viruses, as well as human pathogenic bacteria.

Humans have used Elder for medicinal purposes since prehistoric times and the Elder tree was termed ‘the medicine chest of the country people’ in European traditional medicine, reflecting its broad range of therapeutic uses. Since the time of Hippocrates, it has been famous for its medicinal properties in household medicine and included in official pharmacopoeias.

“Elder Flowers and Elder Berries have long been used in the English countryside for making many home-made drinks and preserves that are almost as great favourites now as in the time of our great-grandmothers.

The berries make an excellent home-made wine and winter cordial, which improves with age, and taken hot with sugar, just before going to bed, is an old-fashioned and well established cure for a cold.”

Almost every part of the tree was utilised, including the flowers, berries, leaves, bark, pith, roots and young shoots. The berries ripen and become ready to harvest from late Summer, at the right time to help the body adapt to the approaching cooler weather and the viral illnesses this can bring.

A large fungus that often grows on the Elder known as ‘Judas’ Ear’ (Auricularia auricula-judae) has also been used for complaints such as sore throats, sore eyes and jaundice. The fungus is still widely used in Chinese cuisine and medicine.

Liqueurs were originally developed as a way of preserving and extracting the medicinal properties of herbs. They were made from medicinal fruits, herbs, spices, flowers, nuts or cream and made more palatable by sweetening them, usually with honey.

Sambuca is a well known Elderberry liquor that originated in Italy in the late 1800s (also containing another medicinal herb, anise). It is served as a digestive, typically with 3 coffee beans floating in it and called Sambuca con la mosca (‘Sambuca with the fly’), signifying ‘health, happiness and prosperity’.

The Ancient Greek physician Hippocrates said, ‘Let food be thy medicine and medicine be thy food’.

In this vein, people have long enjoyed the medicinal properties of Elder by integrating it into their daily cuisine, including condiments and drinks. It is important that when using Elderberries, that only the fully ripe berries are used, as the unripe (green) berries can be mildly toxic.

Following are some traditional home recipes bringing together the culinary and medicinal properties of Elder.

Elderberry syrup is a simple and delicious home remedy to help you and your family overcome colds and flus. Following is a simple recipe (source: https://wellnessmama.com/1888/elderberry-syrup/):

– Pour the water into a medium saucepan and add the Elderberries, ginger, cinnamon, and cloves.
– Bring to a boil and then cover and reduce to a simmer for about 45 minutes to 1 hour until the liquid has reduced by almost half.
– Remove from heat and let cool until it is cool enough to be handled.
– Mash the berries carefully using a spoon or other flat utensil.
– Pour through a strainer into a glass jar or bowl.
– Discard the Elderberries and let the liquid cool to lukewarm.
– When it is no longer hot, add the honey and stir well.
– When the honey is well mixed into the Elderberry mixture, pour the syrup into a  mason jar or 16 ounce glass bottle of some kind.
Ta-da! You just made homemade Elderberry syrup! Store in the fridge and take daily for its immune boosting properties. Some sources recommend taking only during the week and not on the weekends to boost immunity.

The following traditional recipes are taken from ‘A Modern Herbal’, by M Grieve:

The Elderberry will, of course, also make a jelly. As it is a juicy fruit, it will not need the addition of any more liquid than, perhaps, a squeeze of lemon. Equal quantities of Elderberry juice and apple juice, and apple juice from peeling, will require 3/4 lb. [340 g] of sugar to a pint [470 ml]. Elderberry Jelly is firm and flavorous, with a racy tang.

The juice from Elder Berries, too, was formerly distilled and mixed with vinegar for salad dressings and flavouring sauces. Vinegars used in former times frequently to be aromatized by steeping in them barberries, rosemary, rose leaves, gilliflowers, lavender, violets – in short, any scented flower or plant.

Elderflower Vinegar is made thus:

Take 2 lb. [900 g] of dried flowers of Elder. If you use your own flowers, pluck carefully their stalks from them and dry them carefully and thoroughly. This done, place in a large vessel and pour over them 2 pints [950 ml] of good vinegar. Close the vessel hermetically, keep it in a very warm place and shake them from time to time. After 8 days, strain the vinegar through a paper filter. Keep in well-stoppered bottles.

This is an old-world simple, but rarely met with nowadays, but worth the slight trouble of making. It was well-known and appreciated in former days and often mentioned in old books; Steele, in The Tatler, says: ‘They had dissented about the preference of Elder to Wine vinegar.’

Good use can be made of the berries for Ketchup and Chutney, and the following recipes will be found excellent.

Stalk, weigh and wash the berries; put them into a pan and bruise with a wooden spoon; chop the onion and add with the rest of the ingredients and vinegar. Bring to the boil and simmer till it becomes thick. Stir well, being careful not to let it burn as it thickens. Put into jars and cover.

Pick the berries (which must be ripe) from the stalks, weigh and wash them. Put them into an unglazed crock or jar, pour over the boiling vinegar and leave all night in a cool oven. Next day, strain the liquor from the berries through a cloth tied on to the legs of an inverted chair and put it into a pan, with the peeled and minced shallots, the ginger peeled and cut up small, the mace and peppercorns. Boil for 10 minutes, then put into bottles, dividing the spices among the bottles. Cork well.”