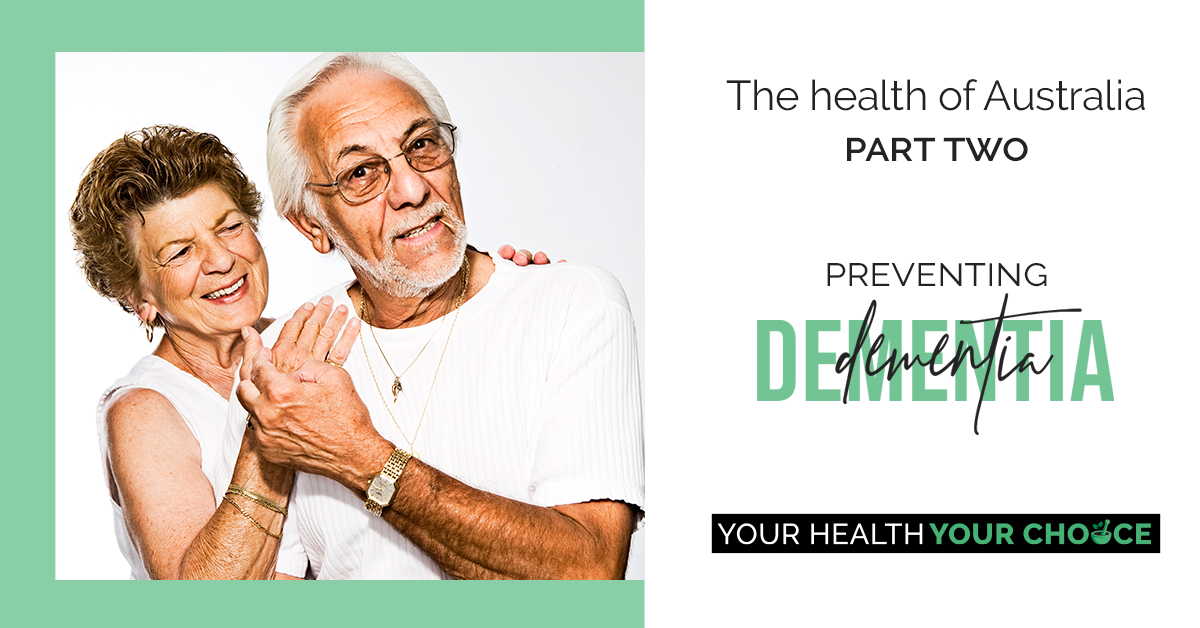 By 2050, the number of people with dementia is set to triple. Pharmacological treatment shows very little promise in slowing the onset or improving cognitive functioning.  Therefore, risk factor modification remains the cornerstone for dementia prevention.

– The most promising strategies currently include:

We will explore the evidence behind these strategies with a focus on natural therapies.

Use it or lose it

The most promising research shows that engaging in moderate physical exercise regularly is one of the best things you can do to protect yourself against developing dementia. Furthermore, exercise can also benefit cognitive function in those already living with dementia.

Data shows that people suffering from dementia in the community engage in long periods of sedentary behaviour with very little physical activity.

The good news is even short bursts of exercise can enhance cognitive performance. A meta-analysis concluded that people who were not previously physically active showed improved cognitive functioning after exercising for as little as 4 months.

It is thought that exercise may improve blood flow to the brain, stimulate nerve cell growth and survival, and minimise cardiovascular risk factors. It is recommended to undertake moderate exercise at least 3 times a week, for 30-60 minutes, to delay the onset of dementia. Moderate exercise could be walking, yoga, tai chi, Pilates, gardening, swimming, etc.

Yoga, as part of a therapeutic program, has been shown to improve memory and cognitive function to the point of sufferers being able to return to work, within 3-6 months.

Yoga classes, and other group training classes, may enhance socialisation of older Australians, another important factor in both delaying and treating dementia. People with limited social networks and low social engagement may be more likely to develop dementia compared with those with socially rich lives.

Using and challenging your brain is imperative to maintain function. Cognitive exercise studies have also shown improvement on memory and attention by engaging in mind training 1 hour per day, 5 days per week, for 8 weeks.

Time to explore some of the scientific literature on natural options. By no means is this list exhaustive – we are just skimming the surface of some common products backed by research.

Many risk factors for dementia, such as obesity, hypertension, cholesterol, and diabetes, can be allayed by diet. Higher adherence to a Mediterranean-type diet has been associated with decreased cognitive decline due to its strong antioxidant element, mitigating these vascular and metabolic risks.

What exactly is a Mediterranean diet? It is a wonderfully inclusive style of eating with a high intake of fats from fish, vegetable oils (particularly extra virgin olive oil), plenty of vegetables and fruits, nuts, seeds, legumes, eggs, herbs and spices, cheese and yoghurt, and even a moderate intake of wine. This diet is naturally low in meats, processed foods, and added sugars. See here for delicious recipes and menu plans.

A recent study on Australian Aboriginal plant extracts showed that they exert anti-diabetic properties by stimulating glucose uptake in adipose (fat) tissue with significant inhibition of the formation of new fat cells. These plants also targeted lipid metabolism, therefore having the possibility of minimising other metabolic abnormalities – the big risk factors for dementia.

Well known olive leaf extract also reduces blood pressure and lipids due to its phenolic compounds while improving cardiovascular output and increasing insulin responsiveness in diabetes. All these risk factors contribute to increased cognitive decline. Olive leaf extract may be an important therapeutic adjunct in dementia treatment and prevention.

Scientific reviews in the last decade support the hypothesis that raised homocysteine levels are a likely primary predictor and potential cause of the brain damage that identifies Alzheimer’s disease in people over the age of 50. Both high homocysteine levels, and low folic and B12 levels in blood correlate with increasing risk for Alzheimer’s.

Evidence shows that lowering homocysteine by giving appropriate supplemental levels of homocysteine lowering nutrients, including B6, B12 and folic acid, may reduce risk. Significant improvement in memory, information processing speed and sensorimotor speed after supplementation compared with placebo groups. B supplementation also demonstrates a significant reduction in brain shrinkage with a 53% lower rate of atrophy in the active treatment group.

B vitamins may have the potential to arrest cognitive decline and potentially improve outcomes for those over 50 who have elevated homocysteine levels.

Some observational studies found that older people with depressive symptoms are more likely to have dementia at follow-up compared with those without these symptoms. It is uncertain if depression is an actual risk factor for dementia or just an accompanying symptom.

However, other studies have found that depressive symptoms coincided with or followed dementia onset rather than preceded it. Furthermore, recent studies have suggested that people with depression have enhanced deposition of β-amyloid plaques (these clump together between nerves in Alzheimer’s disease).

A recent systematic review suggests that the effectiveness of homeopathy for depressed patients is comparable to antidepressants. A significant proportion of patients report improvements in depression following treatment provided by homeopaths and there was no evidence suggested treatment was unsafe. This shows promise in treating depression in those facing dementia.

Food and gut health also play a vital role in depression. Serotonin is a neurotransmitter that helps regulate sleep and appetite, mediate moods, and inhibit pain. Since about 95% of your serotonin is produced in your gastrointestinal tract, and your gastrointestinal tract is lined with a hundred million nerve cells, it makes sense that your digestive system governs your moods.

A healthy microbiome means healthy neurotransmitters. Fermented foods and probiotics may lend a helping hand in gut health and abating symptoms of depression.

Natural therapies have been used extensively throughout the world over many generations for each of the risk factors discussed in this article, and new studies are emerging all the time. We have only touched on the potential of some therapies to mitigate dementia. However, there are many more modalities such as acupuncture, aromatherapy, and mind-body therapies, which show great potential in prevention and treatment of this devastating disease.