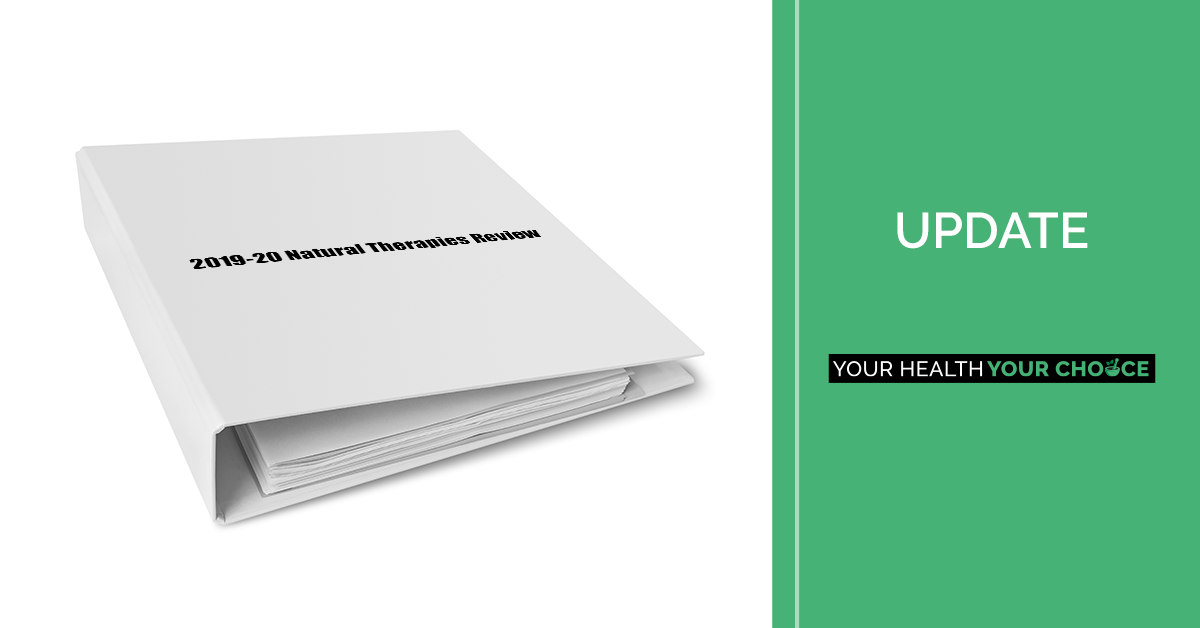 On 9 April 2019, the Minister for Health, Greg Hunt, announced new ‘review updates’ of 16 natural therapies that were stripped of Private Health Insurance (PHI) rebate eligibility just a week earlier. The Minister announced the new review program on the back of a large public campaign initiated by Your Health Your Choice between February and March 2019.

Immediately, problems became apparent with the 2019-20 Review Terms of Reference (ToR). Perhaps the biggest of these was that the ToR specified that only ‘additional evidence published since the 2014-15 review’ would be considered. This risked legitimising substantial flaws and deficiencies associated with the 2014-15 review and creating a narrow (post-2015) window of evidence to work with.

The 2014-15 review was so poorly designed and executed that it excluded the vast majority of the available evidence for therapies including herbal medicine, naturopathy and homeopathy. The findings of studies for modalities such as yoga and shiatsu (that are mainly practiced in non-English speaking countries) also suffered in the 2014-25 review, since non-English languages studies were excluded from scope.

It appeared that foreign language studies were also to be excluded from the 2019-20 Review.

Attempts to clarify such important issues regarding the 2019-20 Review received obscure bureaucratic responses, essentially communicating that modification of the ToR was ‘not negotiable’. Public consultation on the ToR conducted by the Review Secretariat in mid-2019 resulted in no changes, despite extensive feedback provided in expert submissions.

As a result, fears began to rise that the 2019-20 Review was set to repeat the same mistakes of its predecessor, in an attempt to save time and money and meet an unrealistic deadline.

Throughout 2019, the natural medicines sector actively and persistently lobbied government to ensure that the 2019-20 Review is conducted ethically and transparently.

Persistence has paid off and banging against the wall eventually created a crack, achieving some important concessions. Some of these have been communicated in the meeting outcomes of the 28 November 2019 meeting of the Natural Therapies Review Expert Advisory Panel (the Panel formed to advise the Chief Medical Officer on the Review).

Following are some of the major breakthroughs achieved by the natural medicines sector for the 2019-20 Review:

– Studies deemed not to have been properly assessed in the 2014-15 review will now be eligible for re-assessment in the 2019-20 review. This is a very important concession, given the substandard quality of the previous review, which did not properly assess many studies identified and excluded a substantial body of evidence from its scope. The Advisory Panel will determine what evidence needs to be submitted to the NHMRC for reconsideration in the 2019-20 Review.

– The range of evidence eligible for assessment has been broadened to accommodate a ‘tiered methodology’. What this means is that for a given therapy, in the absence of ‘Level I’ evidence (the highest level of evidence according to the NHMRC evidence hierarchy), the evidence search will be expanded to Level II and Level III evidence, to ensure all relevant evidence is captured. This is how health evidence is normally assessed.

– The NHMRC has agreed to include an expert in homeopathy research to advise the NHMRC NTWC on the draft research protocol for homeopathy. The exclusion of any homeopathy topic or research expert(s) in the 2012-2015 NHMRC Homeopathy Review was an unprecedented procedural irregularity that directly resulted in critical methodological errors, and producing meaningless findings.

– Studies published in languages other than English will now be eligible for inclusion in the review.

Stakeholder engagement will continue through regular teleconferences with interested stakeholders to provide updates on the Review facilitated by the Department of Health Secretariat.

The additional work associated with these concessions has resulted in an extension to the original Review completion date – but for the right reasons.

It is encouraging that the Department of Health and the Chief Medical Officer have been receptive to feedback from the natural medicines sector, to ensure that a transparent and ethical review process takes place.

SIGN below to add your voice to the growing number of people concerned about preserving health choices and to help us keep advocating on your behalf.