Are you struggling with PCOS? 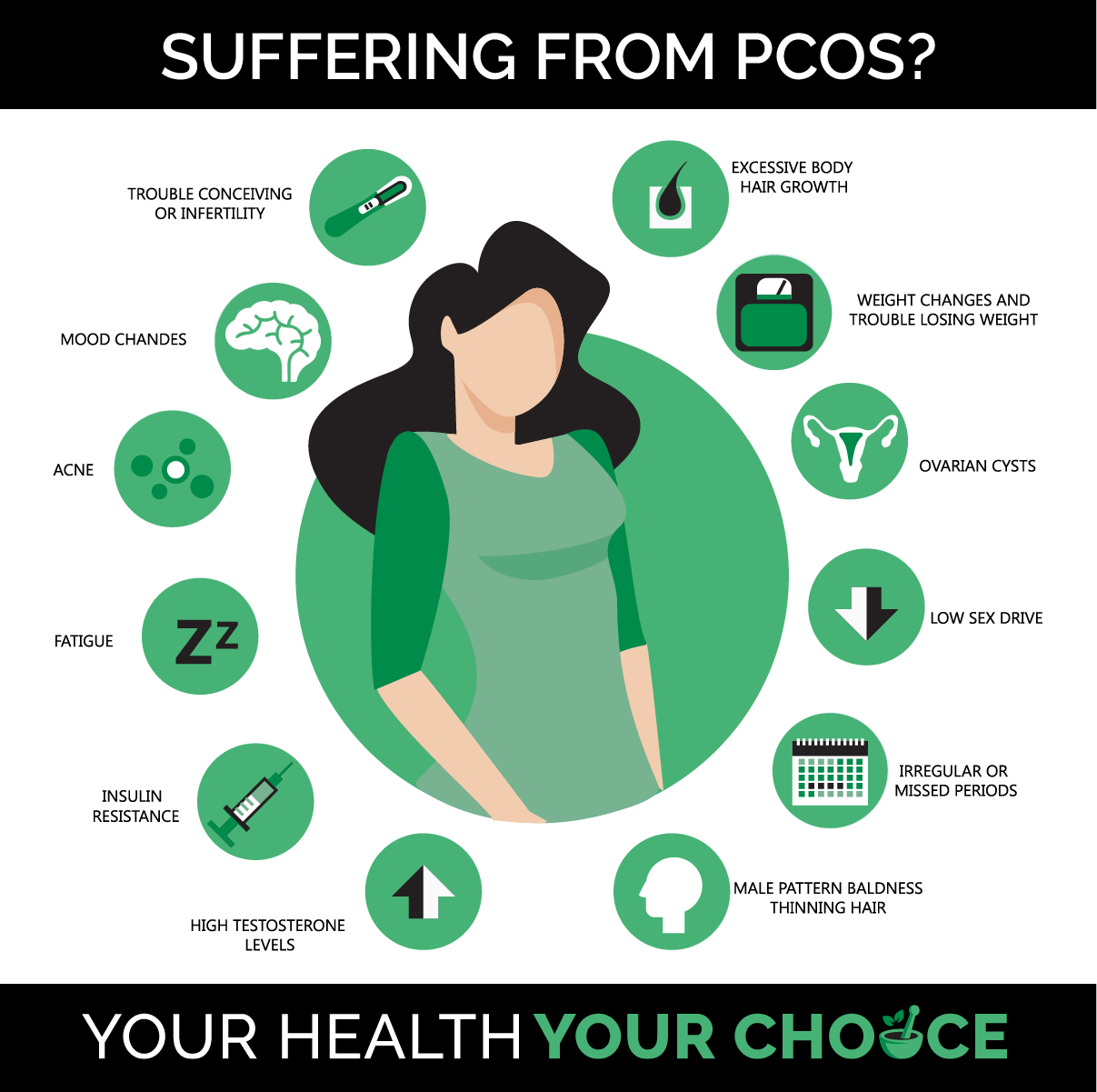 Polycystic ovarian syndrome (PCOS) is an inflammatory endocrine-metabolic disorder often characterised by insulin resistance (IR) and high levels of androgens (testosterone, androstenedione, DHEA and DHT) which triggers the pituitary gland to release too much luteinising hormone in proportion to follicle-stimulating hormone.

This means maturation of follicles on the ovaries is suspended and the dominant follicle is unable to form, leaving many immature follicles (known as cysts). This makes ovulation almost impossible and therefore abnormal or absent periods ensue.

Insulin is a hormone that’s produced in your pancreas. It helps the cells in your body turn sugar (glucose) into energy. Up to 80 percent of women with PCOS are thought to be affected by insulin resistance, which is where your body doesn’t respond normally to insulin. Insulin causes ovaries to release testosterone, an androgen we mentioned above.

There are a range of symptoms that women may experience and present with if they have PCOS and these can vary with age:

In younger women, reproductive symptoms predominate. The prevalence of metabolic features increases with age but can also occur in younger women who are overweight.

Depression will be experienced by up to 64 percent of sufferers. This is staggering compared to the approximate 10 percent in general population. The link between PCOS and depression is emerging as chronic inflammation. During inflammation, chemicals called “cytokines” are produced and can produce symptoms the same as depression.

Interestingly, antidepressants such as SSRIs have also been shown to reduce the production of proinflammatory cytokines, demonstrating the mechanism in which they reduce depression symptoms and reinforcing the link with inflammation. And what do you know? Inflammation and insulin resistance go hand in hand.

PCOS is a common condition, present in 12–21% of women of reproductive age. Worryingly, up to 70% of women with PCOS remain undiagnosed. The danger here is that women with PCOS have a higher risk of metabolic syndrome and its cardiovascular repercussions. This is particularly important for Indigenous women who are already at increased baseline risk with higher rates of insulin resistance.

Polycystic ovaries are very specifically defined as having a minimum of 25 small follicles on an ovary. But note this, it is not enough to look at an ovary and see a lot of follicles – about 30% of the population has “multi-cystic” ovaries with more follicles than “normal” but not enough to qualify as polycystic.

Two of the following three criteria are required for diagnosis:

However, this criterion can be tricky as another condition, hypothalamic amenorrhoea (HA), can present with the same criteria. Therefore, PCOS cannot be diagnosed by ultrasound alone.

Some distinguishing red flags for HA are:

Hyperandrogenaemia and insulin resistance, the key features of PCOS, can often be triggered by genetic predisposition marrying up with environmental factors, particularly obesity, stress, and exposure to BPA from plastics etc.

Compensatory high insulin levels are both a symptom and an underlying driver of PCOS. Insulin appears to disrupt all components of the hypothalamic-pituitary-ovarian axis, causing the ovaries to make more testosterone.

The Australian national guideline highlights the key role of obesity in PCOS. Studies consistently show a higher prevalence of PCOS in women who are overweight and obese. A lifestyle program that addresses a healthy diet for increasing insulin sensitivity, behaviour change support and exercise to aid in weight loss and prevention of future weight gain is the best first line treatment for PCOS.

Cleaning up the diet and stabilizing blood sugar levels by removing refined carbohydrates is pivotal to reversing PCOS symptoms. Your ovaries need the right fuel to function correctly.

Zinc is one of several natural androgen blockers that can reduce testosterone and improve androgen symptoms such as acne and hirsutism (facial hair). One study found that using 50 mg/day elemental zinc for 8 weeks among PCOS women had beneficial effects on alopecia, hirsutism, and plasma MDA levels (a marker for oxidative stress).

Vitamin D levels decrease in obese patients when compared with non-obese people owing to IR. Regarding to PCOS, one large review confirmed the role of vitamin D in metabolic disturbances of PCOS. Thereby, it was found that women with PCOS (who are obese) had significantly decreased vitamin D levels. Moreover, a cross-sectional study reported that lower D vitamin was linked with IR as a result of the pathophysiology of PCOS.

Magnesium absorption can be affected by certain medications, including the contraceptive pill. This is often used as a hormone therapy treatment in women with PCOS who have irregular periods and fertility problems, as well as other PCOS symptoms such as acne and excess facial and body hair.

A report suggests women with PCOS have a higher risk of being diagnosed with a mental health condition than those without PCOS. Recent research has suggested that magnesium may help alleviate mild to moderate depression.

Myo-inositol (MI), belonging to the B vitamins, has been shown in a recent meta-analysis to have a beneficial effect in improving the metabolic profile of women with PCOS, concomitantly reducing their hyperandrogenism. MI is now considered as a further insulin-sensitising supplement.

Always seek professional advice when embarking on nutritional supplementation as requirements vary considerably person to person. We have only included some solutions. Many other natural health modalities can play an important role in regaining hormonal control and getting on top of PCOS.