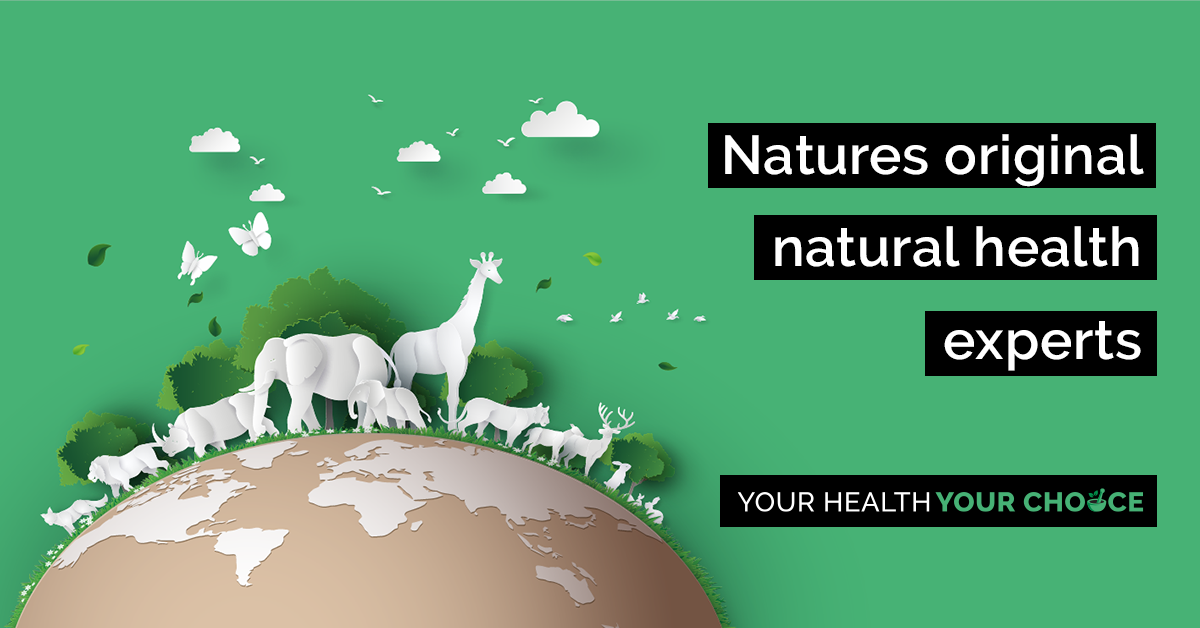 Many animal and insect species have created their own pharmacies from ingredients that commonly occur in their natural environments. One example is chimpanzees being observed consuming the bristly leaves of a bitter African plant. The medicinal plants were purging parasites from the digestive tract, resulting in rapid health improvement.1

This is known as self-medicating. These animals eat things, or rub on things, that make them ease pain, or prevent disease, or kill parasites, bacteria, and viruses, or just to aid in digestion. Even creatures with brains the size of pinheads somehow know to ingest certain plants or use them in unusual ways when they need them.

Most of us have witnessed a pet cat or dog eating grass when they have an upset stomach or a possibly a parasite. The grass helps them vomit up the problem or eliminate it with the faeces.

A wide range of animals self-prescribe the plants around them when they need a remedy.2

In 1996, biologist Michael Huffman established widely used criteria for judging when an animal is self-medicating. First, the plant eaten cannot be a regular part of the animal’s diet; it is used as medicine not food. Second, the plant must provide little or no nutritional value to the animal. Third, the plant must be consumed during those times of year—for example, the rainy season—when parasites are most likely to cause infections. Fourth, other animals in the group do not participate.3

The latest example of self-medication among the great apes comes from the deepest part of the Congo Basin and involves bonobos. Researchers check bonobo faeces as well as tracking the bonobos on foot and observing their behaviour. One of the plants the bonobos eat is Manniophyton fulvum, where they take a leaf or stem from the M. fulvum and rest it flat on their tongues. The animals then layer the leaves on their tongues, produce saliva, and fold the leaves back, forming a ball while avoiding their lips (contact with the skin causes itching and sores). The bonobos eventually swallowed the bolus without chewing. They ingested this plant when the weather was conducive to parasites. The researchers hypothesize that the bonobos make a package out of the plant to preserve it so it works farther down in the intestines.4

How do animals learn to self-medicate?

Often through learned behaviour, but it can also be innate, it is genetic. For instance, the monarch butterfly lays its eggs on milkweed, which has antiparasitic effects. Parasites that effect the butterflies bore little holes in the abdomen, causing the butterfly to lose bodily fluids.  The changes in the butterfly physiology can change the way she responds to smells of the vegetation around her and she may have a genetic preference for these that would do her good.5

These tendencies are also known as “pre-adaptations.” They’re hard-wired behaviours that push animals toward the acquisition of medical knowledge — in this case, by impelling them to try the very flavours they normally shun.1

Chimps and other great apes differ, of course, from many other animals in that medical knowledge is part of their cultural inheritance. For example, young chimps closely watch what their mothers eat,  learning what plants to make them better.5

The scientists researching zoopharmacognosy (animals that know medicine) are convinced that humans can learn from the animals, particularly in finding new medications. A good component of folk medicine likely came from healers watching animals self-medicate.

There is at least one documented instance of a Tanzanian healer observing a sick-looking porcupine chewing a poisonous root; after some careful experiments using small amounts, he used a preparation of the root to treat an epidemic. This could be seen as homoeopathic. The root is still used medicinally by the Tongwe.1

It is highly likely that animals have discovered remedies that we don’t know about yet.

We could almost say that self-medicating animals may be the originators of natural medicine. Regardless, this is another example of the magic and perfection of mother nature in all her glory.